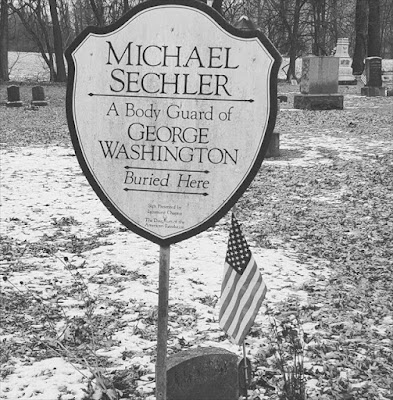 Between the river and the railroad tracks in Montgomery lies a small cemetery, with a marker stating "A Body Guard of George Washington Buried Here" 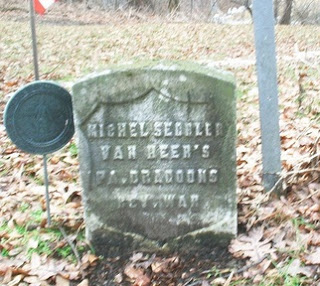 The Pennsylvania Dragoons served on horseback and were split into two units.  The elite guard stayed in close proximity to protect Washington from harm, while the rear guard served as lookouts and messengers. An article in the Altoona Tribune on Dec. 31, 1937, states that Von Heer's "Independent Troop of Horse" served as the bodyguard of Gen. Washington and had been recruited from "men of property" of German areas such as Berks County Pennsylvania.

Michael Sechler, born in 1762, enlisted in 1781 at the age of 19, in the Independent Dragoons under Capt. Van Heer.  (Records indicate he served in the Militia in 1780) He served as a body guard for two years, mustering out in 1783 in Philadelphia.  The commander in chief presented him with "a horse, arms, and accouterments in his possession", at that time. 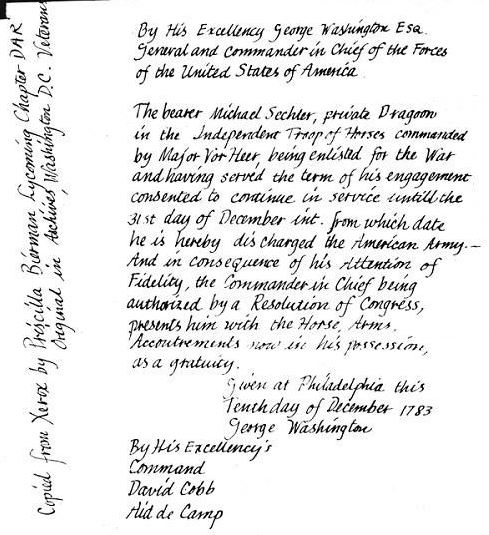 Michael's Uncle, John Sechler, was an officer on George Washington’s staff and survived the famous winter at Valley Forge.  John Sechler settled in Danville Pa, helping to layout part of the town.

Michael Sechler was a potter by trade and manufactured crockery on his farm. He was active and prominent in the affairs of the community, served as Justice of the peace for many years.  He married Rebecca Lowe, and in 1802 they settled on a farm in what is present day Montgomery.

Michael Sechler died on the twenty-third of April, 1847, at the age of eighty-seven years. He was said to have been the last survivor of the Life Guard of General George Washington

Note - Many histories report that Rebecca Lowe escaped by Canoe to Fort Augusta during the Big Runaway of 1778.  A newspaper article in the Muncy Luminary reports that she was 1 year old when she escaped with her family by canoe, as a "babe in arms".  Mengiss history of Lycoming County records this as well.  This would mean that her birthdate of 1779 on find a grave and other online sources is incorrect, or perhaps she was part of one of the smaller "Little Runaways" that occurred in later years.   While the Sechler Family Bible includes the date of Michael and Rebecca's marriage, and the dates of their deaths, it does not include Rebecca's birth date, and I have no source to confirm nor contradict when she was born.

(Or if you are a geocacher, look for the Cache Guarding George) 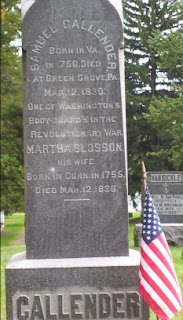 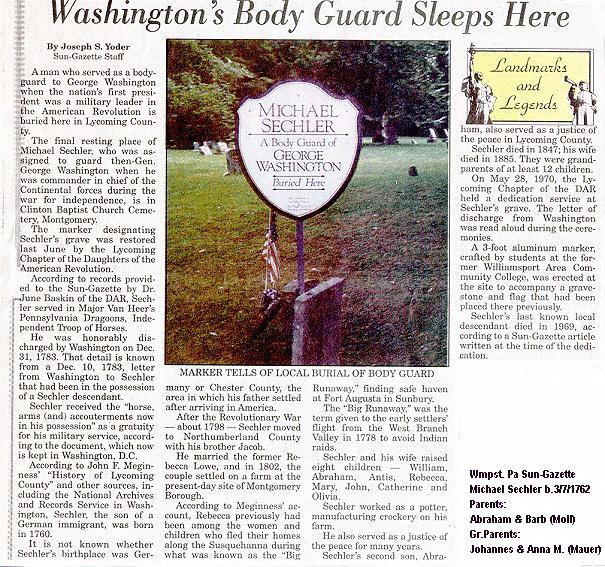 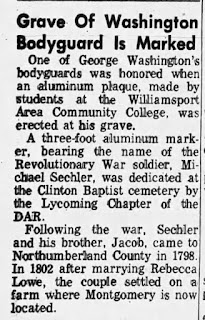 A Brief History Of The Commander In Chief Guards & Roster
http://www.revolutionarywararchives.org/cncguard.html


"Michael Sechler petitioned Lodge No. 22 on March 30, 1790, and his prayer was granted and he was initiated April 28, 1790. The minutes of May 12, 1790, say: "Michael Sechler is going on a journey with Colonel Frederick Antes so he was passed and raised, and paid 2 pounds 5 shillings."
He was elected Senior Warden November 28, 1792, and again at the stated meeting held June 13, 1794. He was elected Worshipful Master December 6, 1794, and served as such until St. John the Baptist's Day following.
He removed to Clinton Township, Lycoming County, where he died on the twenty-third of April, 1847, at the age of eighty-seven years. He was said to have been the last survivor of the Life Guard of General George Washington." FROM "FREEMASONRY IN NORTHUMBERLAND"

Note that two of Michael and Rebecca's children appear to be names after Col. Antes.  The family bible shows that one infant son named Antis died, and in 1805 when their next son was born, they named him Antis as well.

From The History of Lycoming County By Meginness 1892 Biographies Chapter LIII :
MICHAEL SECHLER was one of George Washington's body-guards during the, Revolutionary war. His father immigrated from Germany to Chester County Pennsylvania, where he reared a family, two of whom, Jacob and Michael, located in Northumberland county Pennsylvania, about the year 1798. Michael Sechler married Rebecca Lowe, and in 1802 they settled on a farm where the borough of Montgomery is now located. During the "Big Runaway" Rebecca Lowe was among those who escaped by canoes from their homes along the Susquehanna river, and found protection at Fort Augusta. Michael and Rebecca (Lowe) Sechler were the parents of eight children who grew up: William; Abraham; Antis; Rebecca; Mary; John; Catherine, and Olivia. Mr. Sechler was a potter by trade and manufactured crockery on his farm. He also served as a justice of the peace for many years. His second son, Abraham Sechler, was a farmer by occupation, and was a justice of the peace for Lycoming county several years. He married Sarah Bower, and to them were born twelve children: William; John, deceased; Michael; Elizabeth, deceased; Antis; Joseph, deceased; Rebecca, deceased; Mary; James; Abraham, deceased; Dallis, deceased, and Sarah. In 1854 Abraham Sechler removed with his family, excepting Michael, to White Rock, Illinois, where Abraham and his wife died in the Baptist faith.

An article in the Altoona Tribune on Dec. 31, 1937, states that Von Heer's "Independent Troop of Horse" served as the bodyguard of Gen. Washington and had been recruited from "men of property" of "German" areas such as Berks County Pennsylvania. A roll list of Captain Von Heer's Dragoons State of a troop of light dragoons, having been raised in the Pennsylvania State, and commanded by Capt. von Heer, September 16, 1780, at Tappan, New York finds Michael Sechler: 1781; discharged at Philadelphia, December 31, 1783; residing in Lycoming Co., 1825. - FindAGrave
For More information on the Sechler Family Genealogy:  250 Years of Sechlers in America" by Robert G. Sechler,

"John Sechler was an officer on George Washington’s staff and survived the famous winter at Valley Forge. His son Jacob, born in 1790, fought in the “Danville Blues” in the War of 1812. His brother Rudy, the second postmaster of Danville and later a Justice of the Peace, was famous for his honesty.  "
https://www.dailyitem.com/the_danville_news/news/other-danville-designer-s-home-still-stands/article_d1a3cb56-11ba-11e6-a3b0-6b4d555ee397.html 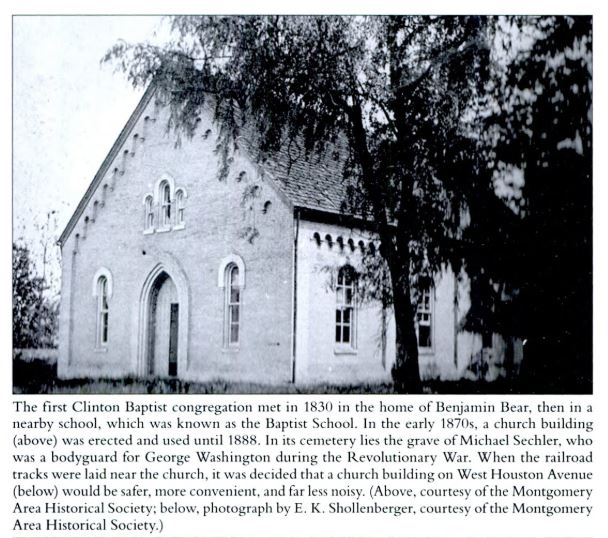 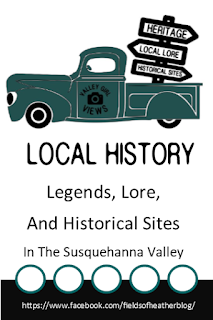