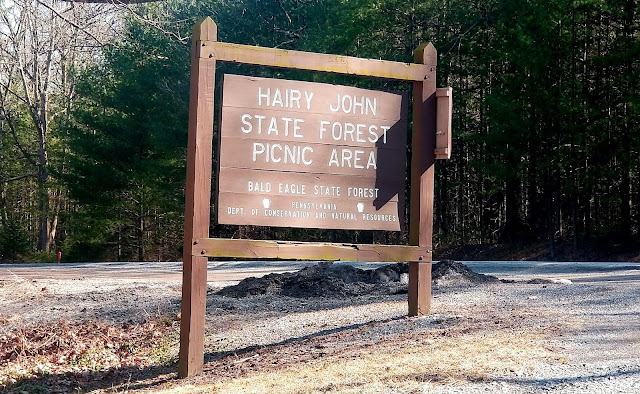 Along Route 45 between Hartleton and Woodward, is a picnic area named for a hermit who, as the legend goes, took to the woods to live in solitude after being accused of killing his wife.

The legend of Hairy John Voneida is a little like a choose your adventure story.  Would you like him to have tried to enter the Mexican American War, or the Civil War?  Either way, the legend has him denied because of his "short stature", even though he was an excellent marksman.

Would you like his wife to have been "feeble minded", or to have had another lover?  If she was feeble minded, perhaps she committed suicide and he was falsely accused.  If she had a lover, then Hairy John killed her in a jealous rage.  In either version, he was branded a murderer by the locals, but never stood trial.

Or maybe the Reading Eagle got it right in 1929 -
“The solemn truth, however, regarding her disappearance was the fact that the lovely, dark-eyed minx had fled to parts unknown with Gershon Rau, a dirty looking Shekener, or Pennsylvania German Gypsy.”

It's like a campfire story that changes a bit with each retelling.

The facts, at least the few that can be found, complicate all of those versions.  The legends  however, all appear to have originated from Col. Henry Shoemaker, a folklorist who never let accuracy interfere with a good story.

All versions of the legend seem to agree that he left his hair uncut and his beard untrimmed, and that his appearance, along with his reputation for having killed his wife, scared the local children, who referred to him as "Hairy John".  In one version, "He also vowed never to shave or cut his hair until he was proven innocent. His hair and beard grew long, and John Voneida became Hairy John, as vindication never came"

And yet... in a 1953 Centre Daily Times interview , Ida Hosterman Motz talked about the mysterious figure from her childhood:

“I saw him twice. The first time when I was about ten years old and had gone with my father to the home of Henry Voneida, John’s brother.  He came out of the house, looked at us shyly and disappeared around the back of the house." And she went on to say,   "He was a little, thin man with two long, blond braids and a full beard, neat in general appearance.”

State Forest Ranger Peter Motz recalled that when Hairy John came to town to purchase salt and molasses, the children  would hide  under porches, in fear.

Edith Wolf Focht, the wife of Congressman Benjamin K. Focht, recalled that her parents told her that "He was an ogre who ate little girls", so she hid under the buffalo robes when they neared the area.  Her parents however, would stop and have coffee and talk with him every time they passed through.

Back to the choose your own adventure - Did Hairy John fall in love again after he lost his wife, or take in an orphan? In either version,  the two made gingerbread and coffee, and served them to travelers who passed through the area.   Her name is reported by Shoemaker as Twila Montray, but there is no evidence that such a person ever did exist.

Some versions specify that when news came that Centre County Civil War soldiers would be passing through the Narrows on their return to Bellefonte,  Hairy John showed his patriotism and appreciation by giving the men gingerbread, cake, and coffee.

The "hermit" was also known for making and selling great quantities of birch beer.  He grew his own tobacco, made cigars, and he made and sold many herb medicines.  And if all of that interaction with the public wasn't enough, Hairy John also said  to have conducted a free, unofficial post office, with passers-by tacking messages to his cabin door. John then delivered the notes throughout the mountains. This legend was obviously not your typical hermit.

Hairy John " was attacked one night by several men bent on robbing the hermit, thinking he had money secluded somewhere about his cabin. They found none, but left the old man severely beaten up. Shortly after this, he was taken away to near Madisonburg by his children and other relatives. He lived in the home of his daughter, who had married Michael Caris. There he remained, being cared for by loved ones, until his passing away October 23, 1878”  -  Reverend J.J. Weaver, Centre Democrat in 1937 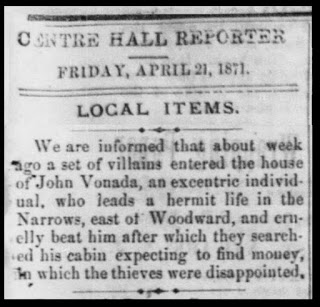 That part of the story does appear to be true, based on the newspaper clipping from 1871.

John Voneida, widely believed to be the Hairy John of the legends, is buried in Madisonburg, Centre County, PA. 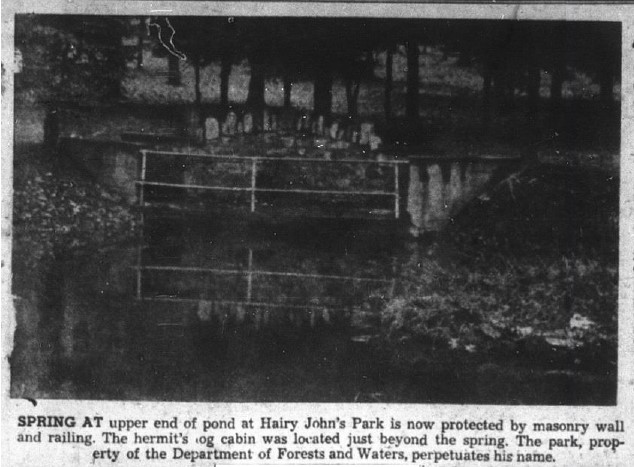 "When Gifford Pinchot, after laying out the Joyce Kilmer State Forest Monument in 1920, drank some of the good water at Hairy Johns Spring, began asking questions and wound up by naming the site the Hairy John Park. Some tried to modify it by calling it Voneida Park, but the forester said, 'Let the name stand, whiskers and all.' And it  pretty much has done so." reported the Lock Haven Express in 1950.

But even that can't be agreed on, apparently.

The spring, a spring fed pond, picnic tables and benches made it a popular stopping place; in 1919, thousands of people visited the site. In the ensuing years, summer musical events drew thousands of visitors. Up to the 1950s and 60’s, when there was also a concession stand, pavilions and outdoor grills, Hairy John Park was a place for families to picnic and spend a pleasant day."

No matter which version of the legend you choose, it's a beautiful place for a picnic. 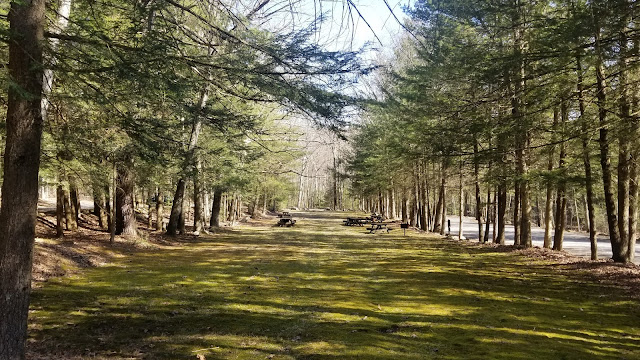 This entire area is moss, with picnic tables and grills. 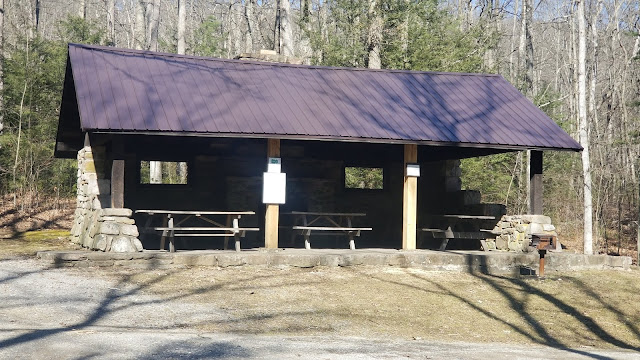 There's a smaller pavillion in the front part of the picnic area, and this much larger one on back the road, with a beautiful stone fireplace. 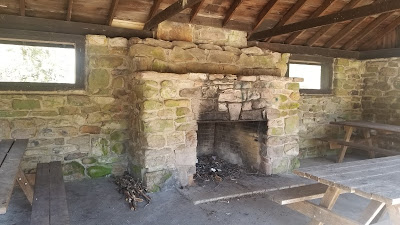 The mid state trail runs through this area, in addition to a variety of other great trails here. 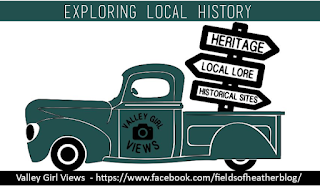 Close to the mammoth spring can be seen the, remains of the foundations of a simple log cabin once the abode of Hairy John Voneida, a picturesque hermit who lived for many years in the locality which bears his name. Born at Jacobsburg, Centre County, now Madisonburg, he early became an expert marksman, and won every shooting match in Brush Valley with his seemingly uncanny skill.

Married to a beautiful dark belle of Sugar Valley, he moved to Clinton County about the time
of the outbreak of the war with Mexico In 1846. Despite his lovely bride's opposition he felt he should enlist, but the recruiting officer at Lock Haven laughed at him, and rejected him as a midget and too small for service. As he was hustled out of the office he shouted, ‘I can shoot better than anybody and Napoleon Bonaparte was shorter than I am.' But he was crudely driven away without a hearing.

At the end of his tramp back to Logansville (now Loganton) he called to his young mate
through the door that he was home, thinking the news would please her. This would be some compensation for his unceremonious rejection. But no answer came, and after a search of the house he found her hanging on a meat hook In the cellar, her beautiful body stiff in death. He notified the village authorities, and the constable placed him under arrest.
" 'No woman could hang herself from a meat hook,' he said, and this was confirmed by the
Coroner at Lock Haven. Yet the coroner's Jury rendered an open verdict and he was freed.

He returned to Logansville where at the town pump he dramatically announced that he was
innocent, that he loved his young wife and that he would not touch a hair on her head, that he was leaving Sugar Valley because of the suspicion leveled at him, and would remain away until he was completely vindicated; further more, he would not cut his hair or beard until that full  vindication came. He said he would retain his home in Logansville, as he expected to come back, and live among his old friends in respect and harmony.

Carrying his long Lehman rifle he started for the southern valleys. At nightfall he came to the flowing spring in the Centre-Union county narrows where he remained for the next 40 years of his life, as vindication never came.

Fifteen years later came another war, the War of Secession, and this time John Voneida again went to Bellefonte to enlist. A recruiting officer with a hard face came into the room in the court house in which the volunteers were seated. He tapped every other boy on the shoulder, to go into his private sanctum for examination but he only glared at Voneida, 'Begone yee pint sized feist,' he growled. ‘I can shoot better than anyone in this court house,' retorted Hairy John. 'Begone, before I take the boot to you, you are too small to fight.' Meanwhile the other boys had gone to the inner room and the sergeant slammed the door in Voneida's face.

"Dazed and humiliated, Voneida staggered out into the sunshine and walked home. At the end of the war he thought he saw a chance of service, a man resembling John Wilkes Booth, assassin of Abraham Lincoln, was lurking around the Stitzer Tavern, at the Union county mouth of the narrows, and despite his short stature he batted him down, arrested him and induced the landlord to lock him in the butcher house. Soon a troop of the Cameran Guards of cavalry arrived, but "Booth" had a satisfactory alibi and all Hairy John got was a lecture from the Captain and then again tramped homeward, much discomforted.

About this time a preacher's niece, Twila Montray, pitying him, offered to keep house for
Voneida, and she straightened out the ‘shabang' and made it neat and habitable. Being a good cook she helped travelers through the narrows, with ginigerbread, molasses and hot coffee, and built up a nice business among the packers, drovers and lumbermen who frequented the narrows.

One day came the news that the returning Centre county soldiers were to march to Bellefonte, through the narrows to be mustered out and Hairy John and Twila served the tired, footsore boys with gingerbread, cakes, and coffee. "They would not let me fight,' Voneida said, 'but I am paying them in some small way for saving our glorious Union.'

Occasionally Hairy John went to Woodward for salt and molasses, and the children, terrified
at his uncouth appearance would run and hide under the porches. Mrs. B. H. Focht, widow of former Congressman Ben Focht, of Lewisburg, recalls that when as a child she drove in a sleigh through the narrows with her parents, she would hide under the buffalo robes when they neared Hairy John's place.

Yet he was a kindly old man, and would have harmed no one, and was on his way to be forgotten, when Gifford Pinchot, after laying out the Joyce Kilmer State Forest Monument in 1920, drank some of the good water at Hairy Johns Spring, began asking questions and wound up by naming the site the Hairy John Park. Some tried to modify it by calling it Voneida Park, but the forester said, 'Let the name stand, whiskers and all.' And it  pretty much has done so.

Despite his widespread reputation, John Voneida, unvindicated and bearded, rests probably in an unmarked grave, and a close search of Central Pennsylvania newspapers fails to list his death which occurred about 1890, though his fame as a great marksman, woodsman and host will linger pretty nearly as long as Pennsylvania history and folk lore endure.

Posted by Heather Truckenmiller on February 23, 2020