When Bloomsburg Had An Ostrich Farm

In the early 1900's, William H. Hile had an idea to help the poor earn money.  His plan was an ostrich cooperative.    Beautiful ostrich plumes were all the rage at the time, in high demand for ladies hats and home decor. In 1909, South African exports of Ostrich plumes amounted to $30,000 annually.  Feathers were selling for $20 a pound.

Ostrich eggs are large - at seven to eight inches, equaling anywhere from 12-20 chicken eggs.  Hotels and restaurants were would serve ostrich egg omelets.  The shells of the eggs would be neatly split in half, and used as home decor. An ostrich reaches maturity in 6 months time, yielding as much as 200lbs of tender meat.

The African Ostrich Farm and Feather Company was formed  by Hile and his shareholders, with $1,000,000 capital. 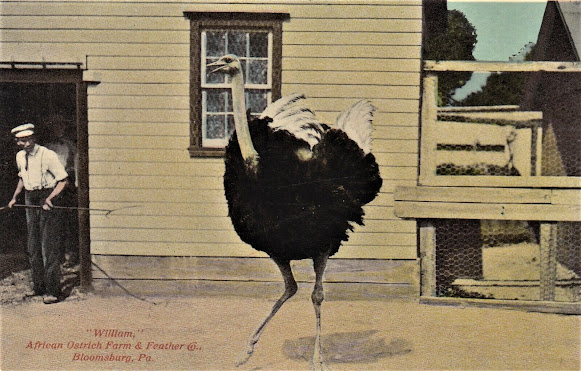 One hundred and fifty acres, the Ringrose farm at Espy Station, along the D.L.& W. railroad area, was purchased for the venture. A large plant was erected for the breeding and care of the ostriches.  Steam pipes were buried in the ground and covered with sand, to providing warmth and comfort for the tropical birds.

A feather house was constructed, and an ostrich plume outlet was opened in Bloomsburg.

Hile then imported forty expensive breeding ostriches from Africa.  The farm also included Belgian draft horses, Guernsey cattle, and Berkshire hogs, and it operated a limestone quarry for fertilizer, a deposit of high grade stone, estimated at over 7,000,000 tons being on the land. 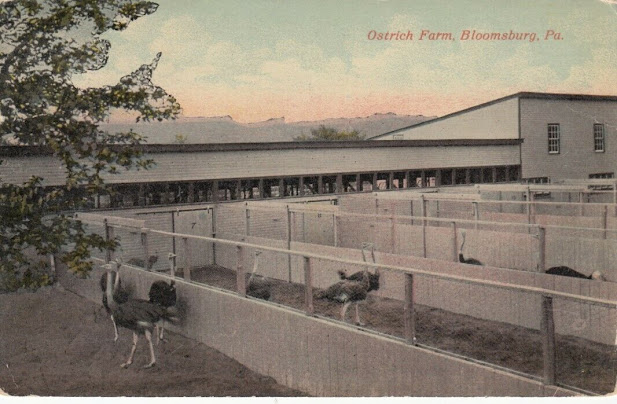 When everything was in place, Hile invited to the public to come and see the operation - and incest.  Excursion trains ran from Scranton, Sunbury, Williamsport, and other nearby communities, to see the birds. Admission was 25 cents.

Visitors were warned not to wear shiny jewelry, eye glasses, or buttons, as the fowl may attempt to eat those objects. 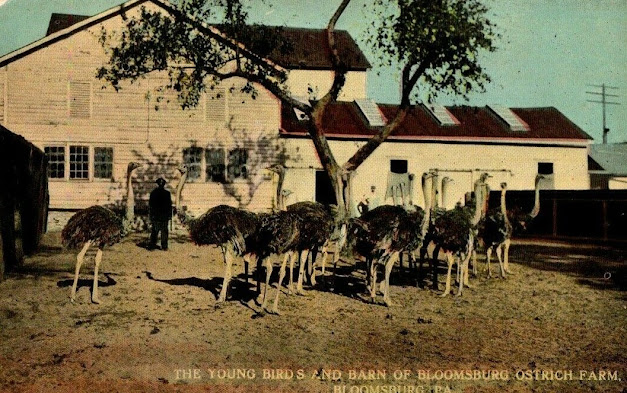 Ostriches are unique animals.  Each male as a number of females.  The females all lay their eggs in one communal nest, where they take turns sitting during the day.  At night, the male sits on the nest, to guard it.  The birds are incredibly strong.  They can kill a horse with a single kick, and can run up to 40 miles an hour. 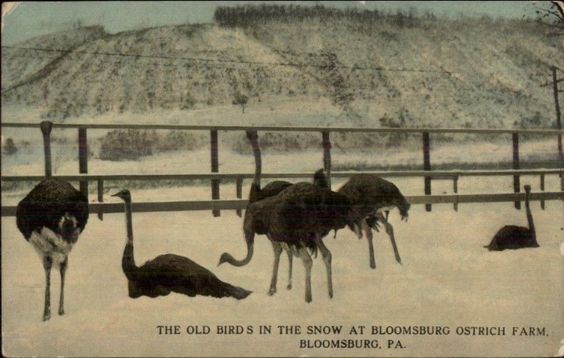 Although the animals produced eggs, and remained healthy, not a single chick was successfully hatched.  A local barber who was renowned for his ability to hatch turkey, goods and duck eggs, was enlisted to find a solution. After months of experimenting, he managed to hatch 42 chicks.

But he refused to divulge his secret.

Within a few years time, the market for the ostrich plumes had dwindled.  They were no longer in fashion on ladies hats, and sales dwindled.  The flock of mature birds dwindled down to just two, which were finally sold to a Bloomsburg restaurant owner for $25.  They served the eggs in their restaurant. 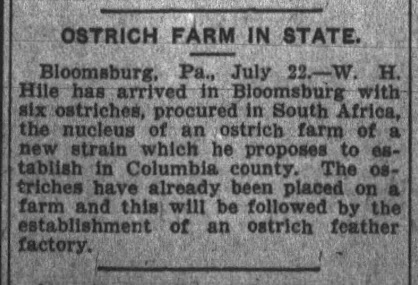 September 1, 1915: After months of legal wrangling, the African Ostrich Farm and Feather Co. of Bloomsburg is put on the auction block, effectively ending the W.H. Hile’s utopian dream of an ostrich-based socialist economy. A total of $152,000 in stock was sold since its organization in 1910, but no dividends were ever paid, and dissatisfied stockholders eventually petitioned for a receiver. (The farm was located in Espy.) 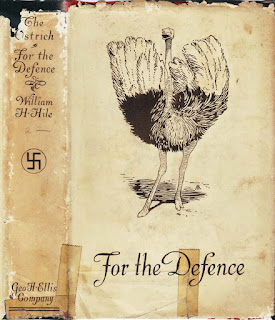 Hile wrote a book about his vision for the Ostrich Cooperative, and about his time in Africa capturing the birds. https://amzn.to/3jnVvNl 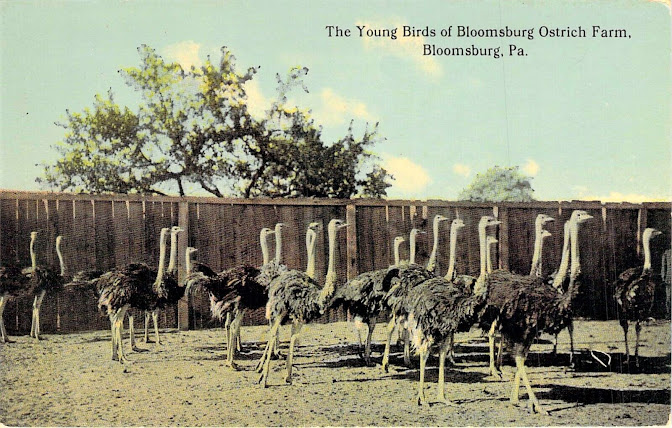 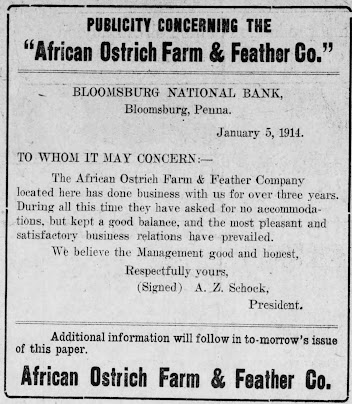 August 5, 1911: Word is received in Bloomsburg that President W.H. Hile of the African Ostrich Company, who had gone to Africa in search of more ostriches, has been successful in his quest and is enroute home with 60 of the birds. The communication is accompanied by a photograph showing Hile's caravan, consisting of a large number of camels, each laden with two cages containing an ostrich, crossing the African desert. Full of adventurous tales, Hile eventually returns to a hero's welcome in Bloomsburg, where the birds are loaded upon wagons for the trip to his Espy farm.

In September of 1911, Hile returned from Africa once again, with more Ostrich.
In 1910 he had brought back three pairs of young ostriches, to start the farm in Bloomsburg.  After seeing that the fowl did just as well in this climate as in California, he returned to Africa for more birds.
"Because of the large profits that can be obtained from these birds" he said " I concluded that if I could succedd in my undertaking it would be the beginning of a great industry in this country."
Hile went on to say that Abyssinia is he home of the only good ostriches, the Blue Nice birds.  "Right away I was beset with difficulties, because Germany, Portugal, Italy and England have laws against taking ostriches from Abyssinia.  The only nation not having such laws at the time I started was France."
"I started my actual hunt from Jimbuti on the east gulf of the coast of Somaliland, being the only white man in the party.  In all, I took fifty-four native and I was the only armed person in the party.  For four months we stayed in the interior getting our birds. " 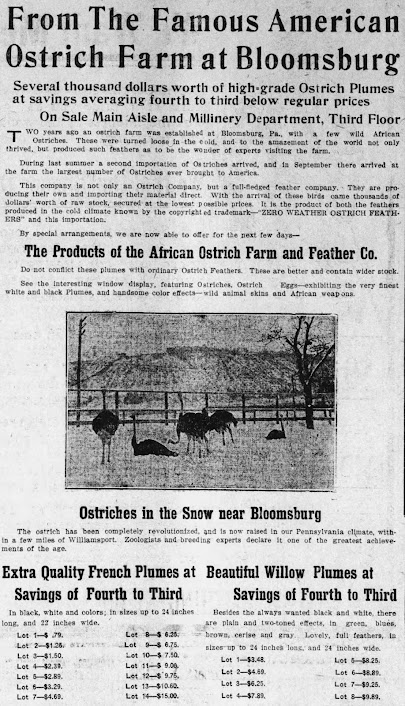 "Our method was to first build a large corral, known as a zereba, of twigs and brush, made so strong that not even a lion could break it.  Then we established what are called pots, with wings, that lead the birds into a trap.  Always I had two things in mind.  First I was to capture the birds, second I was to keep them alive for propagation, so I studied their habits night and day, as I had for the previous year."
Hile ended his 1911 interview by saying that the New York Farm was primarily to be advertising for the Pennsylvania Farm, but in addition to exhibiting the birds there, he planned to breed them and sell their feathers.
The Bloomsburg farm was to be the only Ostrich farm east of the Mississippi, with the exception of two exhibit farms in Florida. 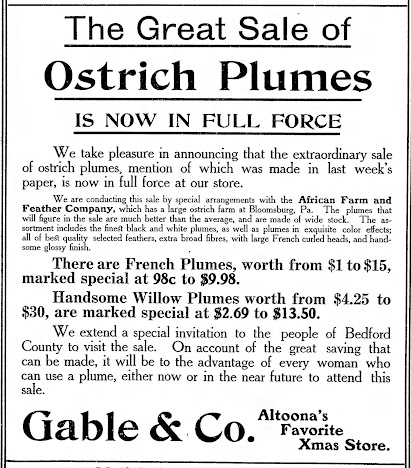 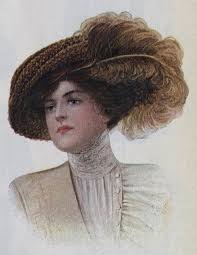 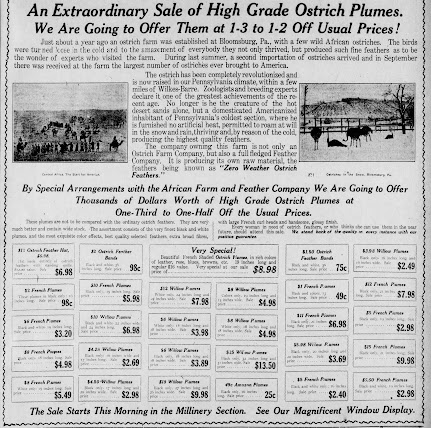 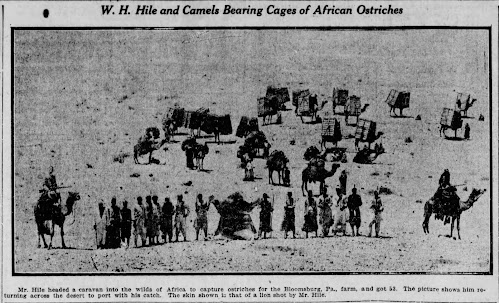 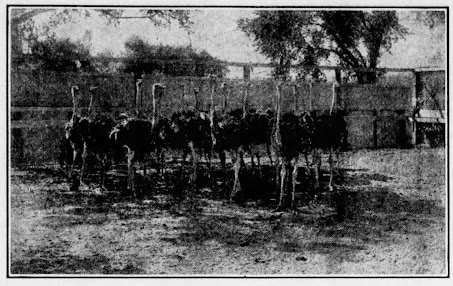 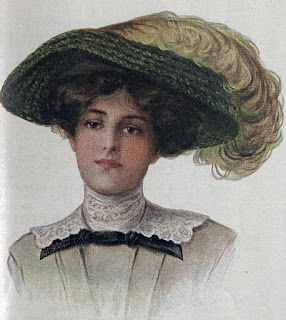 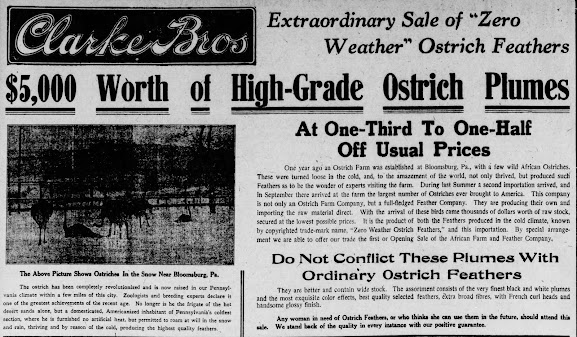 Posted by Heather Truckenmiller on October 01, 2020