The Youngest Man To Be Executed In Pa, Edward Cressinger, Sunbury "In the broad of the noon-day sun, within sixty rods of her own home, Daisy Smith, aged 16 years, a daughter of Henry Smith, a well-to-do farmer of Boyle's Run, about eight miles from Sunbury, was murdered on Monday in the most fiendish and mysterious manner. Her body was found riddled with shot and there was a gaping knife wound in her throat which reached from ear to ear. The girl's clothing was not disarranged and no motive can be attributed for the execution of one of the most fiendish and appalling tragedies Northumberland county has ever known.

Edward Cressinger, an l8-year-old boy of bad character, has been arrested on suspicion and placed in jail."   The Danville Morning News, 12 Oct 1898, Wed  •  Page 3

Edward Crissinger
Edward  Crissinger appears on the 1880 census as 4 months old, the son of Isaac & Sarah. His mother Sarah would die just two years later, in March of 1882. In 1884, Isaac married the former Pauline Lerch, the widow of Albert Keiser.

At the age of 15, in  April 1896,  Edward assaulted a girl by the name of Laura Holdren.  Charged with assault and battery, Cressinger spent 30 days in jail.

By 1898, Cressinger was 18 years old, and infatuated with 16 year old Daisy Smith, his neighbors daughter. While walking home from church in 1897,   the two had a disagreement and Daisy slapped Edwards face.  For the next year, he held a grudge.

On October 10 1898,  Henry Smith's horse was sick. He sent Daisy out to the field to collect some sweet fern, herbs to treat the ailing animal.  An hour later, when it was time for lunch, Daisy had not returned.  Her father went searching for her, finding her body in a field of rye, the bundle of fern laying nearby, splattered in her blood.

As news spread throughout the area, Edward was immediately a suspect.  He was known to have purchased a knife and shells just that morning.  And he had a history of assaulting young girls.  He was found splattered in blood, washing his hands in a nearby creek.

After being questioned by the authorities Edward was taken to the jail in Sunbury, where he continued to protest that he was innocent.  The evidence however, was stacking up against him.    Even his half sister, Essie Keiser, had a much different story of  his whereabouts on the day of the murder than he himself had. 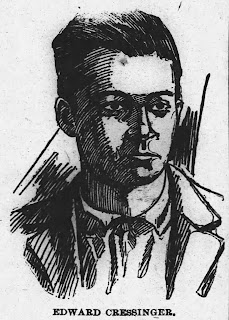 While in jail, Cressinger  asked another prisoner if they could tell the difference between rabbits blood and human blood.  He then confessed to shooting Daisy, but not to slitting her throat.

J.L. Grimm and Miles Daughterty then took a knife to the jail, similar to the one Edward had purchased,  telling Edward that they had found the murder weapon.  It was enough to convince him to confess.  He gave the following written confession:

I, Edward Crissinger, do voluntarily make this statement and confession, and have not been promised any favors, having made the same voluntarily, as my connection with the murder of Daisy Smith on the 10th day of October 1898.
After I came back from the store, as I told Dr. Shindel, also Miles Daugherty and J.L.Grimm, about 10 or 11 o’clock a.m.  I got my gun and two  loaded shells.  Then I went up in the woods.  I had my dog with me; he was  hunting for rabbits.  Then I got on Hen Smith’s ground and sat down at the
corner of the woods.  Then I shot to call my dog, then Daisy Smith came  there.  She told me I would get arrested for hunting rabbits there.  I said I was not hunting rabbits.
I went right up to where she was and told her I  was not hunting for rabbits.  Then I got quarreling with her, and she slapped me.  Then I just held up my gun and shot her, being away about thirty
yards.  She hollered, then I killed her; I cut her throat.  She got up after I cut her throat, wobbled around a couple of steps and fell over.  Then I went home.  The above is a true and correct statement given to J.L. Grimm and Miles Daugherty at the county jail office, Tuesday evening at 7:15,
being  the eleventh day of October, 1898.
Signed,
Edward Cressinger
Although Edward, in his first confession, stated that Daisy slapped him, later he admitted that she had never gotten close to him. She had slapped him a year prior, on their way home from church.  "That's why I put that in there".  At the trial, a doctor testified that the shots had not been lethal, that Daisy would have survived had her throat not been slit.
Newspapers outside of the immediate area  reported that the murder had been pre-meditated, that Cressinger, angry over being repeatedly spurned by  Daisy,  had been lying in wait for her on that morning.
The Trial 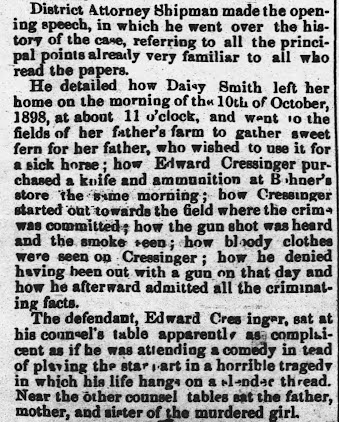 Due to the widespread publicity of the case, "the jury pool was soon depleted".  But eventually a jury was assembled.
On the Jury:
The he trial got underway on Wed., Feb. 8, 1899. In the courtroom, the aisles were packed; people were standing on the window sills and radiators. It was estimated that 1200 people witnessed the trail Attorneys and officials had to fight their way through the crowd to get to the front of the courtroom.
Cressinger  plead Not Guilty.
The counsels then argued as to whether Edward’s confession could be used in court.  The defense said it was obtained in a deceitful way, and that the prisoner was tricked into giving evidence against himself.  After hearing the arguments of both sides, the judge allowed for the written confession to be read.
Shortly after the confession was read, the Commonwealth rested their case.
The defense argued that the prisoner was insane, giving examples of family mental problems and stating that from his infancy Edward was a moral derelict & a sexual pervert.  He was also a man of a very low degree of intellect.
General C.M. Clement, one of the lawyers for the defense of  Crissinger, said "this boy is no criminal.  Killing this girl meant no more than killing an animal."
On Saturday afternoon, the 11th of February, after just one hour of deliberation the jury found Edward Cressinger guilty of murder in the 1st degree. The defense then began a series of appeals, all of which were denied. 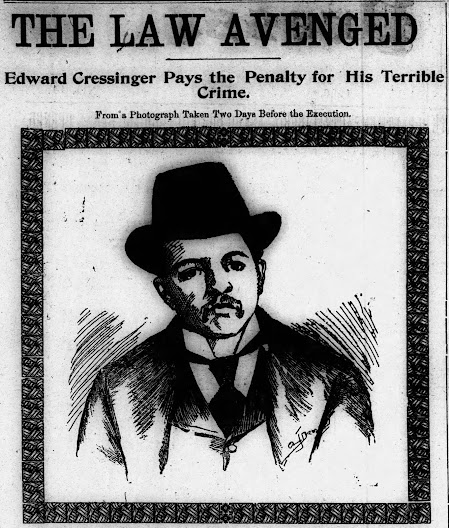 "Few men charged with the crime of murder have been the objects of less sympathy than has Cressinger.  The public was outraged and indignant almost to the point of lynching, because of his bloody crime, and this sentiment was a serious handicap to the attorneys who voluntarily and gratuitously defended him.  The evidence as to the sanity, or insanity of the prisoner was carefully weighed by the jury and their verdict was sustained by the Supreme Court and board of pardons."
Decades later, in  January of 1930, the Shamokin News Dispatch reported "there is little doubt but that in the present age when there is more knowledge of mental ills than there was then, that Cressinger would not have been executed."  "He was subnormal to a market degree.  He found the trial vastly entraining and was immensely proud of his position as a central figure in it.  When he was hanged, he strode with a brisk step through the light snow drifting down into the jail yard to the gallows and cried "Goodbye everybody"

The 1930 Dispatch article reported "In modern terms, the boy was a moron.  There are institutions now for such as he."

Although perhaps mentally deficient, the Jury decided that  Cressinger was also a man with a history of violence, who knew right from wrong well enough to lie and to attempt to cover up his crime.  He was determined to be a danger to society.

On Saturday, May 13th, 1899 the prisoner was once again brought to court and stood before the judge.  These were his words: “Edward Cressinger, you have been convicted of the murder of Daisy Smith, the jury having found you guilty in the first degree.  She never done you any harm; you met her in a lonely spot, while she was in a weak and helpless condition when compared with your manly strength, and the deed, which stands almost without a parallel, was done without any provocation whatsoever.  Nothing remains for the Court but, to carry out the law..…… The sentence of the Court is that you be taken back to jail and from there to the place of execution, where you shall hang by the neck until you are dead, and may the Lord have mercy on your soul.” 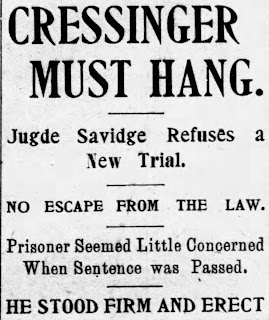 After the defense submitted 8 points of why the Cressinger murder case deserved a new trial, the judge overruled the motion, stating that he believed the prisoner was tried fairly and the verdict was a just one. 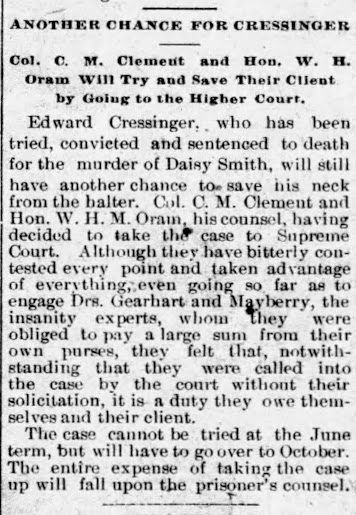 Cressingers defense attorneys paid for the "insanity experts" from their own pockets, and continued to take on the expense of the prisoners defense, taking  the case to the Supreme Court. The Supreme Court upheld Savidges ruling - the trial had been fair, and the verdict was just.
The Gallows

The execution took place in the corner of the jail yard next to the street.   The gallows were borrowed from Dauphin County Only 125 persons were admitted, through passes, to view the execution.  It was a cold January morning, with snow falling.  The Daily news reported that "the snow was falling fast at this time, and they [spectators] were covered in a mantle of white" 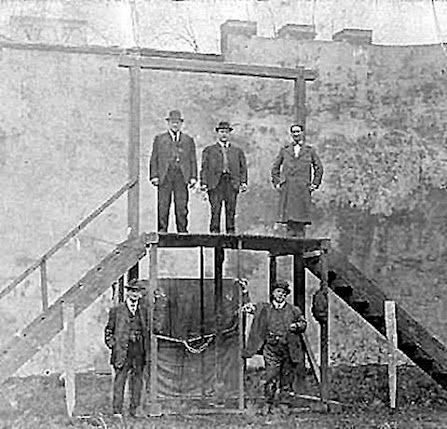 A photo of the gallows in the Sunbury Jail Yard
(This photo is likely from the earlier hanging of Peter McManus)
During the execution of Peter McManus years earlier, papers reported that the  school house was once across the street from the county jail. and that  teachers ordered the children to leave for home via the back streets.
In January of 1900, the  scaffold was located in the South West corner of the jail yard, "at a point where it was supposed to be away from the view of outsiders".  However, every housetop and available space to view the execution was taken up.
The prisoner declined to walk to the scaffold with anyone, insisting on going ahead of the sheriff and spiritual advisor. He walked with a firm step and "did not show the least excitement."
Isaac Cressinger visited with his son the morning of the execution but chose to stay inside while it took place.  Henry Smith, father of Daisy, stood with the viewers in the front of the scaffold.
"Looking down at the spectators, he said: 'Goodbye boys, take good care of yourselves".  Dietrick, the warden, then asked if Cressinger had anything else to say, and Cressinger replied "I am guilty of what I did and I hope the Lord will forgive me. That's all."
At 10:29 a.m.  the trap door fell and Edward Cressinger entered into eternity.  He was the first minor [under the age of 21]  to be hanged legally in the state of Pennsylvania.
The rope used for the hanging was made by Edward Frederick of Philadelphia. It was burned in the jail furnace after the execution. 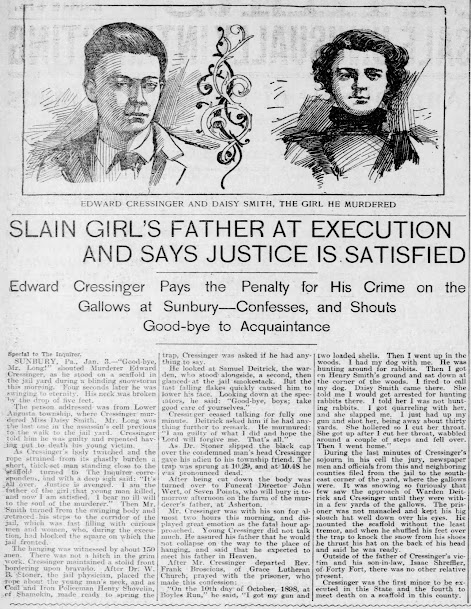 On Thursday, January 4th, 1900 in the orchard near the Cressinger home, near to where Daisy had been killed in her own field, a funeral was held for Edward .
The Daily News reported that attendance at the funeral was very large, with many attending out of curiosity, but with many others attending out of sympathy to the aged father.  "The Attendance however, was not as large as might have been expected on an occasion of this kind."  After the service,, the highly polished oak coffin was thrown open and all were invited to view the remains. On the lid of the casket was inscribed the words "At Rest." 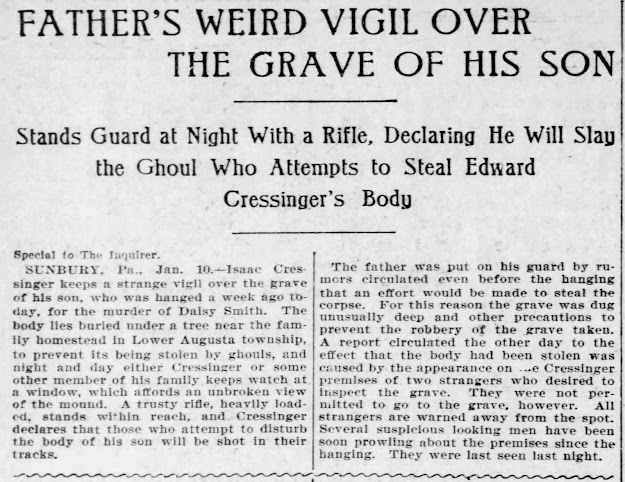 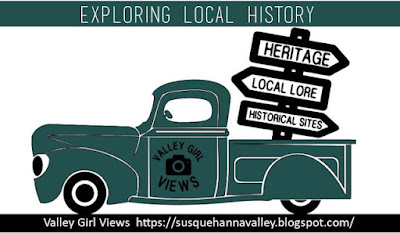 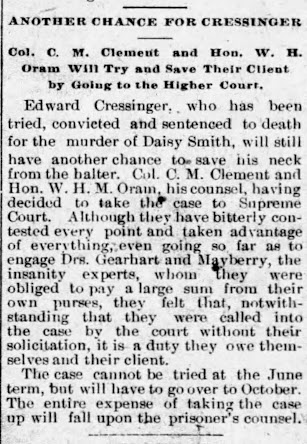 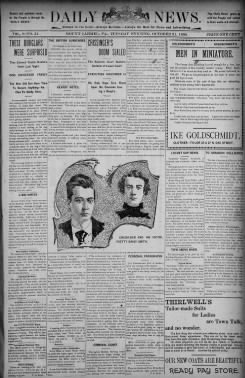 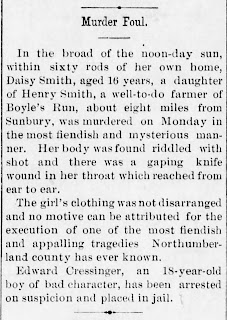