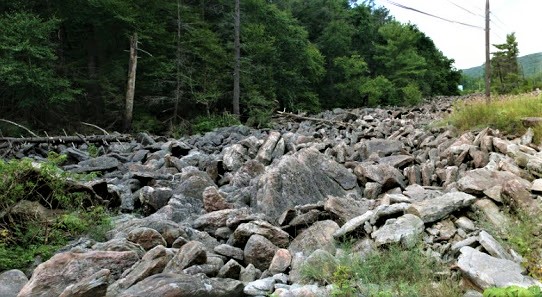 The Devils Turnip Patch, Along Route 15 Between White Deer and South Williamsport

In 1900, the Philadelphia Record wrote of The Devil's Turnip Patch.

"On the top of Bald Eagle mountain, Just where the old turnpike breaks- over the brow down Into Black Hole valley, Is a queer field of rock, which years ago was christened "The Devil's Turnip Patch."
The rocks, which are of a reddish sandstone, have a striking peculiarity of all standing on end, thus forming a jagged, irregular surface, that won for it its queer name from the early settlers
In bygone days, when the stages wheeled their way up from Northumberland to Williamsport, the four in hands traversed the old pike that skirts the turnip patch, the strange garden of rocks was a constant source of wonderment to the traveler.
Added to its interest as a natural curiosity is a hidden stream of water somewhere beneath the standing stones, the noisy flowing of which forms a  romantic sound beneath one's feet. Nobody knows where the source of this stream is, nor can anybody find where it empties itself into Black Hole valley. The rock field covers an area of two or three acres with its widest part to the north, then narrowing down V shaped to the south, where the angle is lost in a fringe of stunted hemlocks and elders.  Theorists have figured on the cause of this mountain freak, but the theory obtaining most credence is that it is a legacy of the glacial age, the rocks being . a collection pushed into their present vertical position by the moving ice. 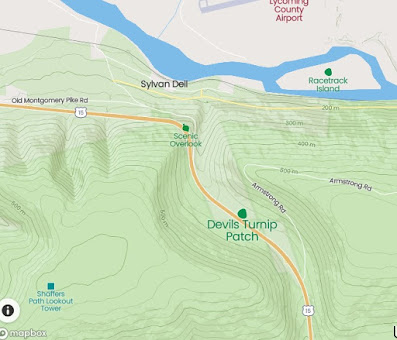 "The Devil’s Turnip Patch, a boulder field south of the Bald Eagle Mountain overlook on Route 15, is a derivative of this process that’s caused locals to scratch their heads, according to Veronica Ciavarella, professor of Geology and Environmental Science at Pennsylvania College of Technology.

“It’s quartz-rich sandstone called the Tuscarora Formation. Boulders were broken away from where the Tuscarora is in place further up the ridge and deposited by retreating glaciers during the last ice age,” she said. “Iron oxide staining of the rocks gives them a pink to purple coloration, making it appear as a ‘bad’ turnip patch, presumably leading to the name Devil’s turnip patch.” - Williamsport Sun Gazette 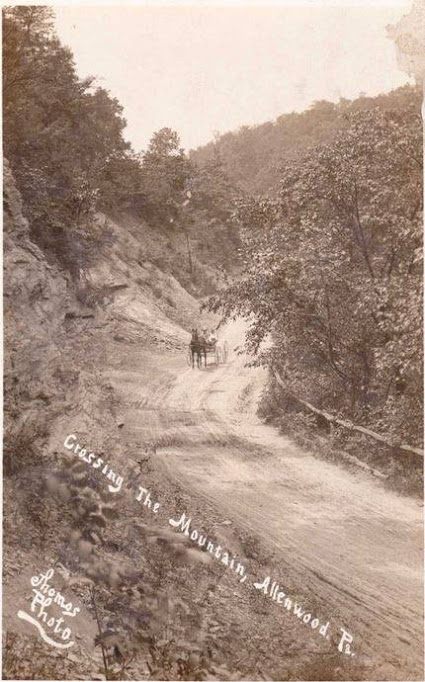 Although Devils Turnip Patch is not shown, here's a look at what the" road over the Allenwood Mountain", route 15 today,  used to look like.
=================
J.M.M Gernard wrote of it in his 1909 Booklet
Snap-Shots of Scenery, Geology and History
"About five miles west of the terminus of the Bald Eagle is a deep rift, or cross-crack, known as the Turnpike Gap, through which a turnpike has for many years connected Clinton Township with the City of Williamsport. A curious feature of this fissure is a spot called "The Devil's Turnip Patch."

It consists of a large space along the pike, on the west side, without a tree or bush, that is covered with immense blocks of stone piled up in haphazard profusion. Hidden from sight under the rocks a brook can be heard, as it goes babbling on "to join the brimming river."

The scene is one that never fails to excite the wonder and curiosity of all thoughtful beholders. Old Nick doubtless never gathered the stones, and never attempted to raise turnips in such a barren patch, but the question is, how did the stones get there in that particular spot?

Some one may be ready to tell us that these boulders are Drift-Relics, and will be pleased to lead us back in imagination to the age of the great continental glacier, when immense icebergs would become detached from the slow-moving sheet of ice and float off to drop their freight of rock as they melted. And perhaps the narrator would fancy that a great floe of glacial ice loaded with rock was stranded in this gap, and discharged its freight right on this spot, and possibly that a series of icebergs were drawn through this gap by a strong current and were wrecked here.

But in this case the rocks all appear to belong to the very formation on which they rest, and that rather spoils the theory. Geology is a noble science; and it is also an excellent study for the exercise of the imagination." 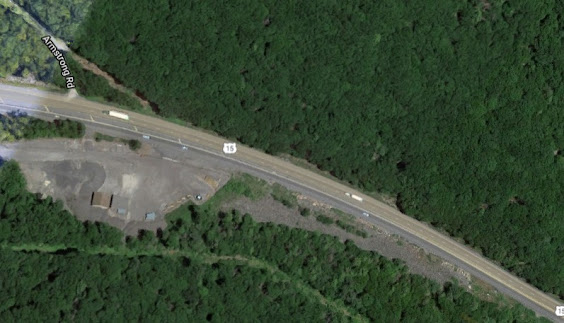 In 1938, The Devils Turnip Patch was nearly destroyed

"The past year has been a hard  one on Pennsylvania scenic objects. The original Devil's Turnip Patch, near Waynesboro where dark eyed WalIy Simpson [Wallis Simpson, for whom Prince Edward gave up the throne] , who,  reports say soon is to be accorded her regal perquisites and return to Fort Belvidere played "hide and seek"" as a wee girl, was sold to a state highway contractor whose stone crusher soon  turned the granolithic knights  armor and gallant ladies, who the child Wally -with strange prophetic vision curtsied to, into a mass of. trap rock and screenings to the infinite sorrow of nature-loving  generations.
Not satisfied with this savage, vandalism a start was made with the crusher to reduce the second j Devil's Turnip Patch on the pass , between White Deer Valley and South Williamsport, but like the hero of Thermopolae, Bruce A. iHunt, formerly of the Altoona Tribune staff, now a rising sun of Pennsylvania history, contacted  highway officials who called off  the vandal hordes before a great  deal of damage had been done.
Akl along the Susquehanna canal WPA crews ripped out the canal locks, including the finest one of all near Sunbury,  abutments and stone bridges while filling station builders took a heavy toll of these mementoes in the same area.
Protests came in too late, as with the Devil's Turnip Patch at Waynesboro, and, as old  John A. Pentz. octogenarian custodian of Snow Hill monastery remarked. "We ought to have a Bruce Hunt in every community if any of our natural scenery to be saved."  - The Altoona Tribune, November 1938 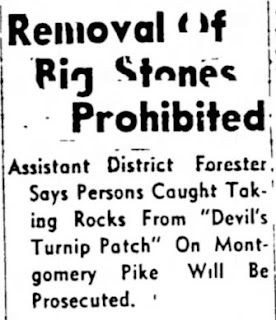 In May of 1937 the Williamsport Sun Gazette reported that those taking stones from state land must have a permit, and that no permission would be granted to remove stones from the Devils Turnip Patch, "which is considered by local persons an unusual formation of much public interest" 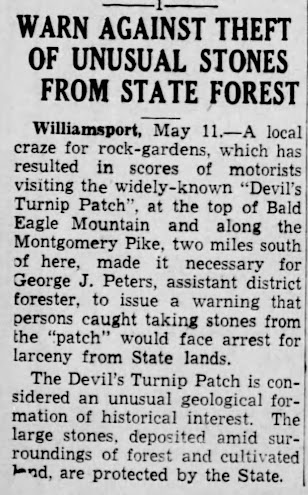 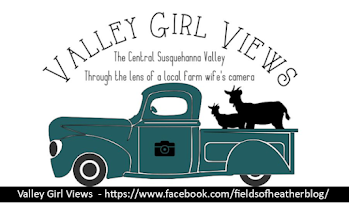 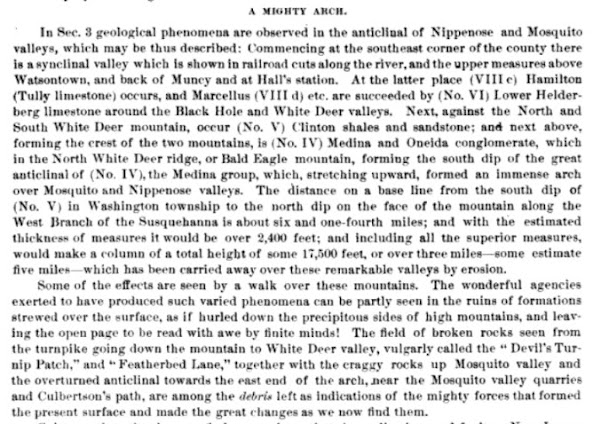 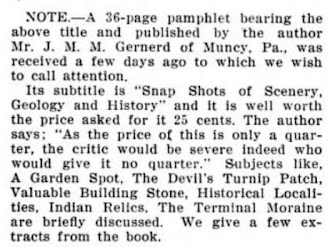 The Muncy Valley
Snap Shots Of Ceneery, Geology, And History
By J.M.M. Gernerd of Muncy 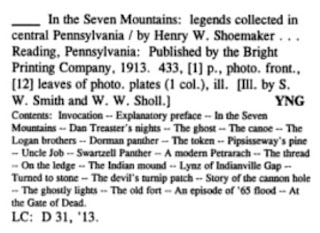 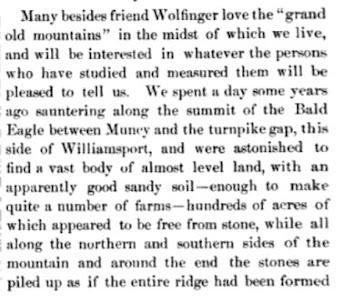 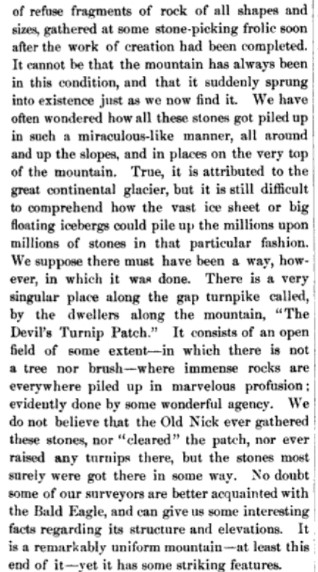 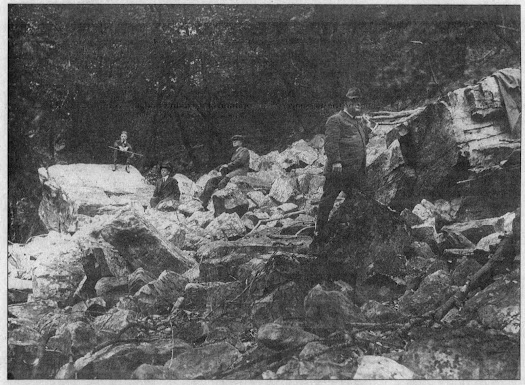 Several areas in Pennsylvania were known as The Devils Turnip Patch. The "Devil's Turnip Patch" shown above is located east of Doubling Gap (north of Newville) in 1915.  This area was known to be inhabitated by a number of poisonous snakes. 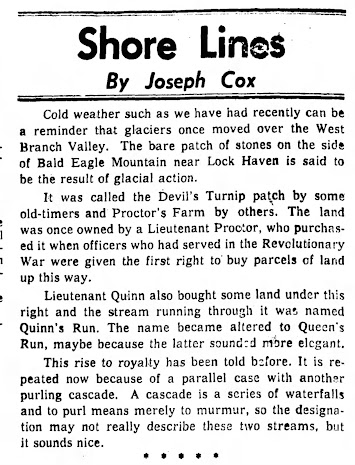 The Perry County Democrat, 1932
Posted by Heather Truckenmiller on June 14, 2021