Swallowed By The Earth - The Suddenly appearing Cave & Sinkhole in Oriole 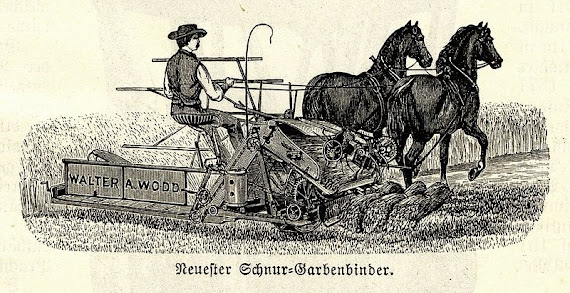 On Wednesday July 12 1899, while John Evans was  driving a binder to which three horses were attached, the earth opened up and the horses, driver, and binder fell into a hole 20 feet deep.  Evans was able to escape, but in 10 minutes time the  hole had filled with water, drowning the horses.
The above illustration shows a horse drawn binder, 1889. 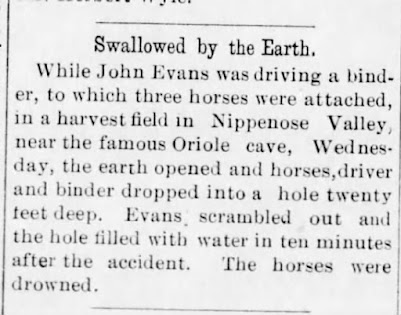 Article from July 14 1899
Oriole is located in Lycoming County Pa, just over the line from Clinton County.  Ravensburg State Park is nearby.
Just 3 years prior, a cave had appeared suddenly in Oriole.

" Further South in Nippenose Valley is the Oriole Cave which suddenly appeared in a farmer's field one fine morning in 1896, and has been there ever since. A subterranean stream is said to lead from it into the Susquehanna three miles away" - Eldorado Found, by Henry Shoemaker 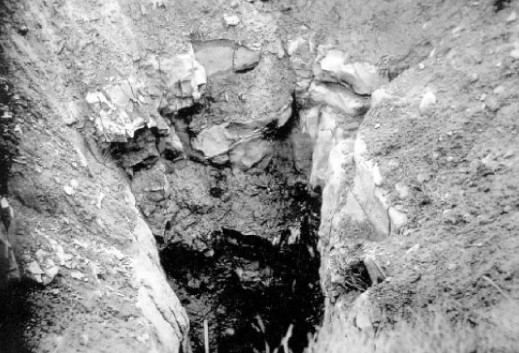 This large sinkhole appeared on the Ira Dougherty farm in Nippinose Valley, on May 1928.  Thousands of tourists flocked to the area to see this.  Bands played, hot dogs were sold, it was quite the production for awhile.
In A History Of Lycoming County by Meginness: "Nippenose Valley is an oval limestone basin. The mountains surrounding it rise from 600 to 900 feet high, with a border of mound like hills not so high as the mountains, but forming a sort of scalloped terrace. There are but two breaks in the mountain ridge Rauch’s gap and Nippenose gap, almost opposite each other in a north and west direction.

The great natural phenomena in the valley are the immense "sink holes" in the limestone floor of the basin, which occur in various shapes and sizes, but at a comparatively common depth of eighty or more feet. Some are rectangular with vertical sides; others are quite conical. On this account there are no running streams and no wells in the valley. All the water flowing from the mountain sides sinks and accumulating in the subterranean, caverns, finally gushes through one of these holes in the western end of the valley, just above Millport, in the shape of a spring of immense volume which forms Antes creek and flows northward through the great ravine in Bald Eagle mountain to the river. The water flowing from this spring is of sufficient strength to drive a grist mill less than half a mile away, and a large woolen mill but a mile distant. Oil a rocky ledge overlooking the spring G. L. Sanderson has a summer cottage, which is a delightful place of private resort in season. The stream has always been noted for trout, and to take them with a fly is a source of much pleasure to sportsmen."
"A little to the south of Bastress the highway joins the valley road that leads northwest back to the Susquehanna & Jersey Shore.  It will be hard to resist the temptation to turn to the left, and pass on to the lovely White Deer Hole Valley, just over hte mountains.  But the road to the right through the Nippenose Valley leads to Jersey Shore - unless one yields to the other allurements of this richly dowered region.  The valley, with it's several surrounding mountains, and its Oriole Cave, which dates back to 1896 when it startled the residents by its sudden appearance, should satisfy any appetite for the beautiful." - Seeing Pennsylvania, Faris, 1919 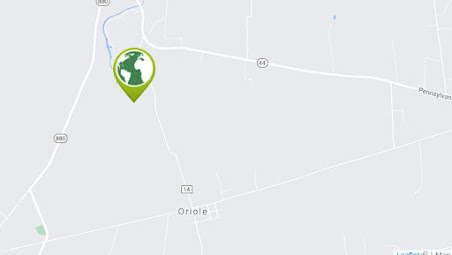 Map showing the a Karst Window, near Oriole
"A karst window is a special type of sinkhole that gives us a view, or window, into the karst aquifer. A karst window has a spring on one end, a surface-flowing stream across its bottom, and a swallow hole at the other end. The stream is typically at the top of the water table. Karst windows develop by both dissolution and collapse of the bedrock. Many karst windows originated as collapse sinkholes."
==========
READ MORE
========== 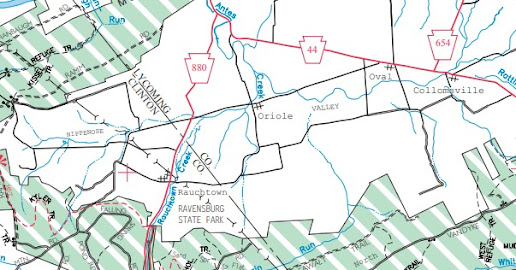 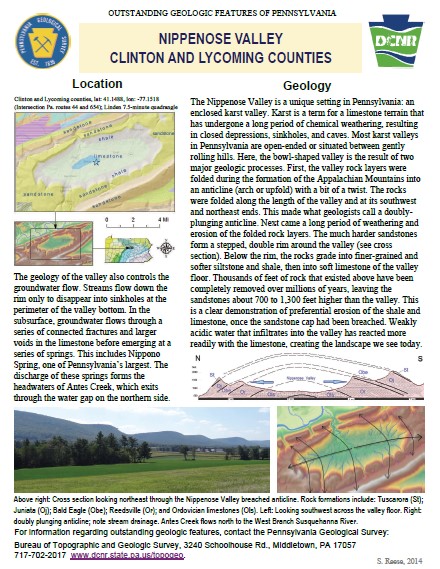 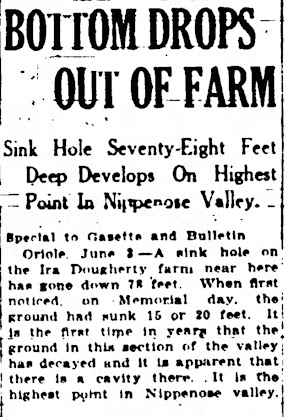 Posted by Heather Truckenmiller on August 28, 2021