The Lee Massacre in Winfield Pa 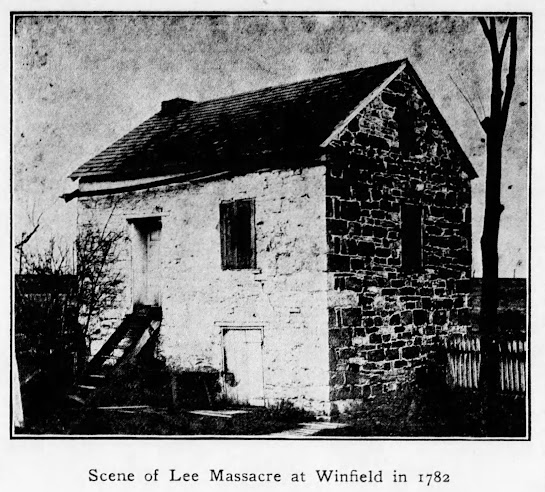 John Lee lived a few miles below Derrstown (Lewisburg) in the area that is now Winfield. On a warm evening in August, Lee and his family, along with a few of his neighbors, were having supper.  A band of Indians suddenly burst upon them.

Katy Stoner rushed upstairs and managed to hide behind a chimney.  Lee was tomahawked and scalped, as was an old man named John Walker.  Mrs. Boatman and a daughter were also killed.

Mrs Lee and two young children were taken captive. One of Lee's sons, who had not been at the supper,  had just been returning home as the Indians were leaving the house.  He was not seen, and he quickly fled to Northumberland and raised the alarm.  A party of twenty men were hastily collected by Col Hunter and they started in pursuit.

When the party arrived at the Lee home, Lee & Mrs. Boatmans' daughter were alive, but in great agony.  Litters were quickly constructed, and they were sent to Fort Augusta.  Lee soon expired, but Miss Boatman recovered and lived for many years.

Without delaying to bury the dead, Col Hunters party pursued the savages, catching sight of them above Lycoming creek.   In crossing the mountains, Mrs Lee had been bitten by a rattlesnake, and her leg was greatly swollen, slowing the party down.  At the mouth of Pine Run, below Jersey Shore, she could go no further.  With the whites rapidly approaching, an Indian slipped up behind her, placed his rifle at the back of her head, and shot her. The entire upper portion of her head was blown off. The Indian then picked up her little child and hastily dashed it against a tree. When Col Hunter and his men came to the scene, the child was moaning, but alive, and the body of Mrs. Lee was still warm.

Crossing the river as quickly as possible, they could see the savages, but as they came to the mountain swamp, there was no way to be sure the Indians were not lying in the thicket waiting to ambush them. Much exhausted, they reluctantly gave up chase, and headed home, stopping to bury first Mrs. Lee, then the others at Lee's house.  "A hole was dug beside walker, and his body rolled into it."

Thomas Lee, the child taken captive, was not recovered for many years.  His older brother, who had raised the alarm, made arrangements with certain Indians to bring his brother to Tioga point, where he was delivered to his friends. Thomas, having been raised among Indians, did not wish to leave.    The friends tied him up, and placed him in a canoe.  When near Wilkes Barre they untied him, and he ran off.  It was several hours before they caught him. Once in Northumberland, Thomas remained sullen.  Indian boys and girls his own age were made to play with him for several days before he showed any disposition to join them.  Eventually he began to inquire the names of things, and gradually "became civilized" 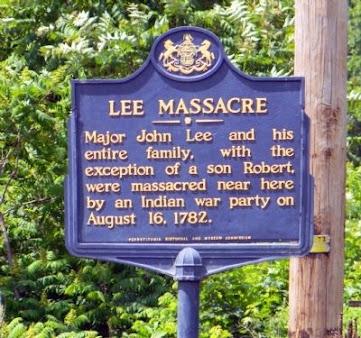 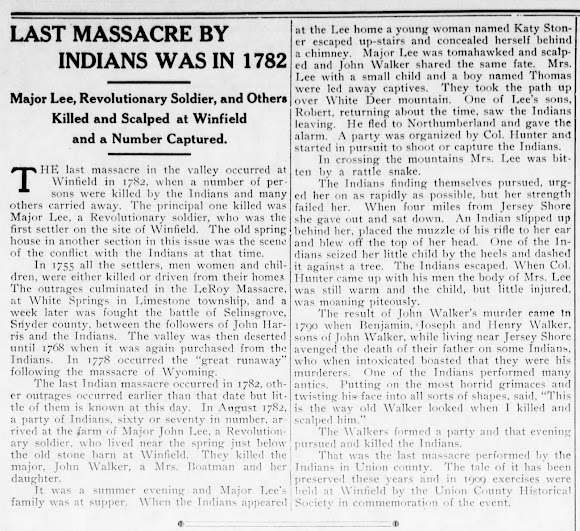 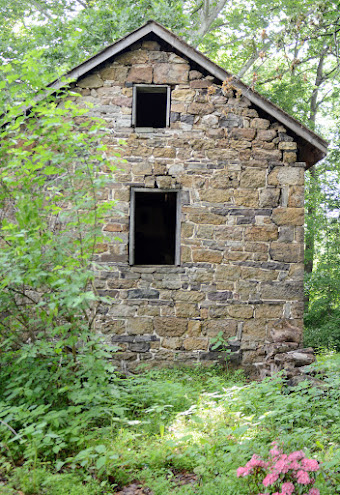 Among the local militiamen who volunteered to protect the region, was
Major John Lee who had settled in the area now known as Winfield, being among
the first settlers following the Treaty of Stanwix (1768). He acquired about 300
acres in April of 1769 from the Penn Proprietors, naming it “Lee’s Adventure.”
The stone house that still stands along the creek in Winfield is believed by many
to be the site of Lee’s homestead.

Lee owned the first tavern in what is today Winfield.  The tax assessment list in 1775 shows him to be a wealthy man.  His household was one of only 12, out of 146, in the area to have servants.

There is a gravestone on the side of the southbound lane of Route 15 in
Winfield that bears Major John Lee’s name. That stone does not mark the grave
of John Lee. In 1938, Pennsylvania State Representative, Charles R. Reagan
along with C. M. Steese of the Union County Historical Society applied to the War
Department for a headstone for the unmarked grave of Lee. Then in August of
1939 a celebration was held in Winfield to set the marker and remember Major
John Lee and the incident that occurred in 1782. The program included an
invocation, a speech by the Secretary of the Northumberland County Historical
Society, a speech by the Honorable Charles R. Reagan, and another by the
President of the Union County Historical Society and the unveiling of the marker,
a military salute by the Troop “C” firing squad, and closed with a benediction.
The marker reads, JOHN LEE MAJOR 1BATTALION PA MILITIA
REVOLUTIONARY WAR AUGUST 12, 1782

From Indian Wars of Pennsylvania By C. Hal Sipe pg 674:
Outrages in Union County in 1782- The Lee tragedy
Indian outrages in Union County began on May 6th of this year, when two men named Lee and Razoner were killed between Mifflinburg and New Berlin, and Edward Tate was badly wounded. They belonged to Capt. George Overmeir's Company of Rangers.
On the evening of August 13th 1782, occurred the attack on the home of Major John Lee, in what is now Winfield, Union County.
This was one of the most revolting crimes of the Pennsylvania frontier. The family and some neighbors were seated for supper when between sixty and seventy Indians rushed into the house, tomahawked and scalped Major Lee, and old man named John Walker and Mrs. Claudius Boatman and her daughter. A young woman named Katy Stoner hurried up the stairs and hid behind a chimney, where she remained undiscovered, and thus survived to relate the details of the story. Mrs. lee, her small child and a larger boy named Thomas were led away captives. Lee's son Robert, who was absent when the Indians came, returned just as the Indians were leaving, but was not discovered by them. He fled to Northumberland and gave the alarm.
The Indians fled along the Great Path, leading up that side of the valley of the West Branch of the Susquehanna, over White Deer Mountains, and then crossed to the east side of the river below Muncy. Colonel Samuel Hunter with a band of twenty volunteers hastened in pursuit from Fort Augusta, where Sunbury now stands. Arriving at the Lee home, Col. Hunter's men found some of the victims of savage cruelty yet alive and writhing in the agony of their wounds. Both Major Lee and Mrs. Boatman's daughter were alive, and were carried back to Fort Augusta on litters, were the Major died in great agony soon after his arrival, while Mrs. Boatman was nursed back to health. Colonel Hunter and his party, without waiting to bury the dead, hastened after the Indians as rapidly as possible, and came in sight of them above Lycoming Creek.
Mrs. Lee was accidently bitten on the ankle by a rattlesnake while crossing White Deer Mountains, causing her leg to become terribly swollen and to pain her so severely that she traveled with great difficulty. The Indians, realizing they were being pursued, urged her along as rapidly as her strength would permit, but she became weaker and weaker, and when about four miles below where Jersey Shore now stands, her strength entirely failed her, and she seated herself upon the ground near the mouth of Pine Run. By this time, Colonel Hunter's party were close upon the Indians, and in order that the poor woman might not be recovered by the whites, a warrior stealthy slipped up behind her, placed the muzzle of his rifle close to her ear and pulled the trigger, blowing off the whole top of her head. Another Indian then snatched up her young child, and holding it aloft by the feet, dashed it against a tree. The whole Indian band then fled with renewed speed, crossing the river at Smith's fording, at Level Corner, and following up through Nippennose Valley. When Col. Hunter's men came upon the spot where Mrs. Lee was murdered, they found her body still warm. Happily her child was not dangerously injured, but was moaning piteously. The pursuit was now pressing with so much vigor that near Antes Gap, the Indians hurriedly separated, further pursuit was not prudent. His men came back and then buried the body of Mrs. Lee where she died and returned, bringing back the child. At the Lee home, they halted and buried the dead there. They dug a hole alongside of Walkers body and rolled him in.
================

The murder of Maj. John Lee and several members of his family, some time on August 16, 1782, was very cruel and caused much excitement among the people. He lived near what is now the little town of Winfield, a few miles above Northumberland, on the west side of the river. It was a warm evening, and Lee and his family, with one or two neighbors, were eating supper. Suddenly a band of Indians burst upon them. Lee was stricken down and scalped, and an old man named Walker shared the same fate. Mrs. Boatman was killed and scalped, and a daughter was also scalped. Two or three escaped. A son of Lee named Robert was returning home, and when he came in sight of the house the Indians were leaving it. He fled to Sunbury and gave the alarm. In the mean time the Indians, retreated up the river, carrying Mrs. Lee and her infant child with them as prisoners. Colonel Hunter hastily collected a party of twenty men and started in pursuit. When they reached the house they found Lee and Miss Boatman still, living. They were sent to Sunbury on litters for treatment, but Lee soon after died. Miss Boatman recovered and lived for many years.

Posted by Heather Truckenmiller on October 22, 2020