The King Of Bootleggers Was A Prince In Central PA 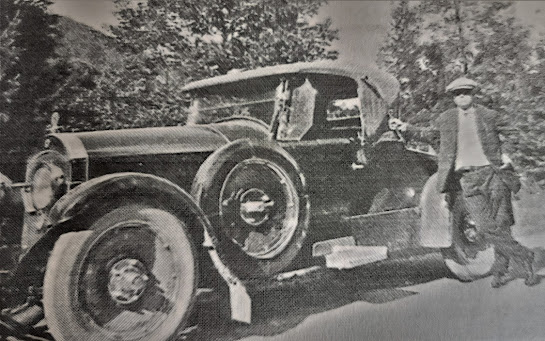 Prince David Farrington
From 1920 to 1950, central Pennsylvania was home to The King Of Bootleggers, a Robin Hood with the best hooch around.    He made millions running as many as 30 illegal stills throughout the valley, and he generously gave those millions to his community - repairing  churches, providing shoes and groceries to poor families, and even rebuilding an entire home for a family after it was lost in a fire.
After numerous arrests, fines, and time spent in jails an prisons,  the millionaire died penniless, severely malnourished, with gangrene in his feet so severe that he had had  difficulty walking in the years leading up to his death.
One federal agent reported that Farrington had everyone in Clinton and Lycoming Counties on his payroll in one way or another, and many, many, locals have stories about Prince Farrington.  Here in the Valley,  Farrington remains a legend, a true Prince among men. 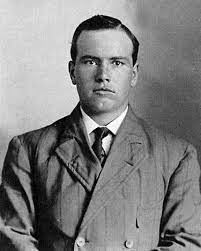 Born in Greensboro North Carolina on June 3rd 1889, his legal name was Prince David Farrington, son of Thomas & Betty [Williams] Farrington. He was named for Doctor Prince, the doctor who delivered him.
Prince Farrington  learned his trade from his father, who operated a still on their North Carolina farm.  Around 1902, a neighbor was thought to have informed on the Farrington still.  Prince, at the age of 12, burnt down that neighbors barn in retaliation, resulting in the first of what would become many arrests. 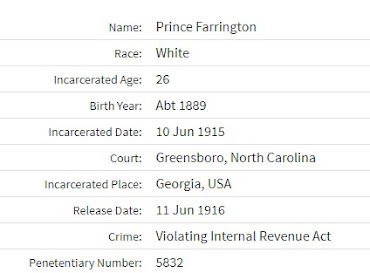 After being arrested several times in North Carolina, held in both county prisons and once in the Atlanta Federal Penitentiary, Farrington brought his wife and three children to Sugar Valley in Clinton County PA.
He quickly built up a network of stills and distribution route.  He owned a fleet of autos and trucks, and knew everyone in the area. In 1920 however, the Volstead Act, better known as prohibition, had made his product illegal.  And Farrington had many brushes with the law, serving time in a variety of prisons and jails throughout the country.
Later in life Prince was asked whether he preferred Pennsylvania or North Carolina, and Prince replied,  "I like these close mouthed dutchmen." 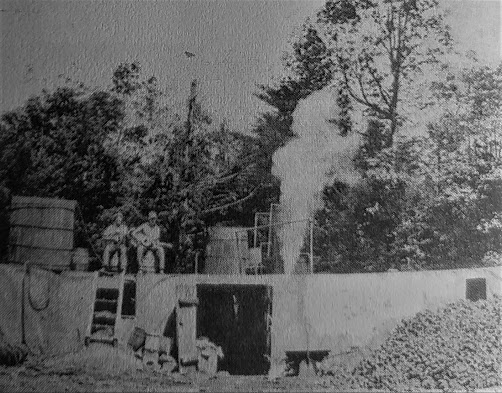 One of Farrington's many stills, location unknown
In Pennsylvania, the arrests continued, and his fortune increased. His "Florida Fruit Farm" was well known for it's alcohol. He paid farmers double the market value to grow rye, instead of wheat and oats.
A chemist who analyzed his liquor reported that it was superior to the average moonshine. A state liquor store manager said not only was it better than the states product, but it was cheaper too.  Farrington is quoted as saying “My neighbors up in central Pennsylvania always said I could turn out the best moonshine they ever tasted.” 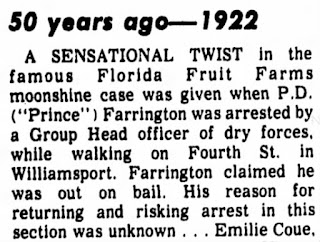 January 6, 1922
Federal agents knew that to locate stills, all they had to do was taste the streams.  Whiskey stills needed water to operate, and were almost always located near springs.  The process left a whiskey taste in the water, that could be detected downstream.
Prince Farrington learned that limestone would filter the taste from the water, so he placed his stills in areas rich in limestone. It was not enough however, and Farrington continued to be arrested for his illegal stills. 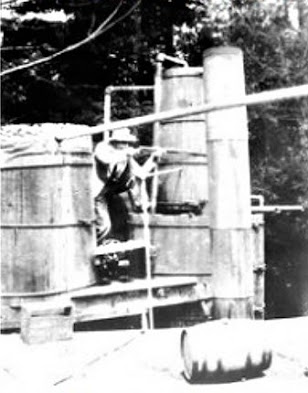 A staged "danger" photo, at a Farrington Still near McElhattan Pa .
The area near Rosencrans falls, where the reservoir today, was the location of at least one of Farrington's stills.  Others were located as far north as North Bend and Jersey Mills, and as far south as Lamar and Elimsport.  The Florida Fruit Farm was located right along where Route 80 runs today, between Rauchtown and Loganton.  The Millbrook Playhouse in Mill Hall once housed a secret storage compartment for Farrington Booze, as did other businesses throughout the area.
At least one of his stills was recorded by a liquor control board officers as having a capacity of producing two thousand gallons every 24 hours.  The going price was $1 a quart.
"During one arrest, one of the revenue officers inventorying booze called out a certain number of barrels at 50-gallon capacity. Farrington then softly drawled, "I never saw those barrels in my life, but I'll bet you $100 that they don't have no more than 40 gallons in them."
According to the July 19, 1922, edition of The Evening News in Harrisburg, enforcement agents from Williamsport raided Farrington’s farm and found “two 200-gallon stills and 52 barrels of moonshine, coloring and other materials.” 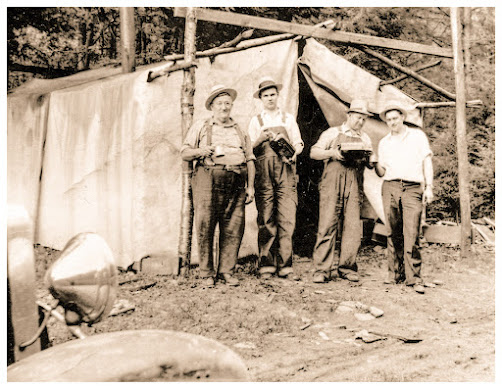 Left to right: DeWitt "Pud" Hill, Lemuel Groce, Charlie Farrington [Brother of Prince], Colonel Monte Seagraves. at one of Prince Farrington's Stills. It's thought that Farrington had more than 30 stills operating throughout the area.
On Aug. 26, 1925, The Scranton Republican reported that 38 barrels of hard cider and “other booze-making apparatus” were destroyed by members from the U.S. Marshals Office in Williamsport. The stuff was seized on the ‘Fruit Farm’ in Lycoming County. The place at which it was seized is said to be owned by Prince Farrington."
“Farrington is believed by the police officers to be the largest illicit liquor distiller in the state,” reported The Indiana, Pennsylvania, Gazette on May 26, 1926. 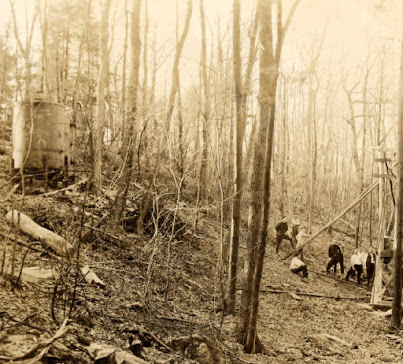 Photo from the James V. Brown Library Collection, showing a still in the woods.
At a still run for Prince in the Muncy hills, the product would be jarred in canning jars and stored on cellar shelving behind fabric curtains. The mash would be fed to the hogs after fermentation was complete.  In another area the hooch was hidden among jars of dry cleaning fluid.  Many businesses had hidden stashes of Farrington's product, but even more was buried in the ground at area farms.
"Prince was the King of Bootleggers, and made the best doggone liquor that ever came out of a copper worm.  Once, during a party in South Renovo, the gang ran out of the anti-Volstead stuff, and we took a short trip with this pal.  We drove out to an old baseball park, walked across it to a copse of woods.  Using his flashlight, the pal soon pinpointed a small spruce tree about two feet height. We held the light while our companion pulled up the tree. Buried under it was a two gallon charred wooden keg filled with golden ambrosia.  You could always tell the king's stuff because it had little tiny flecks of charcoal running through it." - D.W. Solomon
Mr Budd Webb purchased the old Florida Fruit farm in 1965, where he later discovered rotting kegs in the woods.  Many others told tales of kegs hidden underground, including Leo Taylor, who recalled seeing his first bulldozer at the Coltrane farm, where it dug a large pit. Planks were then laid down, whiskey barrels stacked on the planks, and then it was all covered with dirt and corn was planted on top. 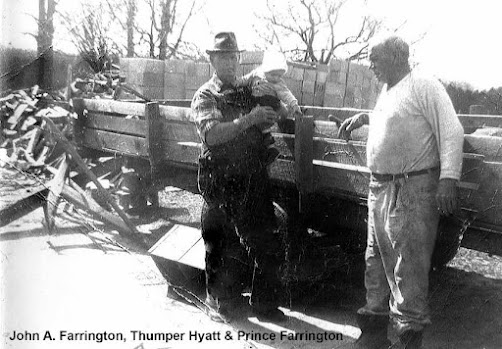 Photo found on Ancestry.com
Ironically, Prince Farrington's daughter Gladys won the Women's Temperance Unions Annual temperance essay contest when she was in high school.  There are many other humorous stories, including that Mary Coira, friend of the Farrington's, served her whiskey laced meatloaf at a temperance meeting held by her neighbors. Another story tells of Prince sending his son, known as Whitey, to deliver whiskey to an event in Harrisburg.  When Whitey pulled onto highway 15, he had a state police motorcycle escort all the way to the Pennsylvania State Police Annual Picnic, where the whiskey was to be served.
Boomtown on the Susquehanna describes Farrington as "The Robin Hood Bootlegger"
"A generous man, he donated to churches and needy families, earning the nickname "Robin Hood of the farmers".  At Christmas time, Farrington distributed jugs of illegal liquor to his drinking neighbors, while presenting hams to the neighborhood teetotalers. Local legends regarding his generosity include funding the re-roofing of a church in Antes Fort, the complete rebuilding and refurnishing of a poor family’s home in Sugar Valley after a fire, donations of bananas to local school children during the depression, and even regular distribution of his own whisky to the area’s ill for medicinal purposes.
As Guy Graybill wrote in Prohibitions Prince,  "Farrington had no time for keeping track of money.  If he wasn't going to obey the tax laws, why keep cumbersome financial records? "  For most of his life, Prince had more money than he needed. 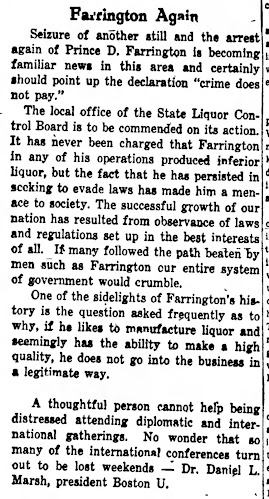 When prohibition ended in 1933, but to make and sell whiskey legally, there were a list of requirements that Farrington was not willing to meet, including divulging his recipe. His legal troubles continued, as government agents now arrested him for tax evasion.
From 1937-1939 Farrington was Prisoner #5784 at the Northeastern   Penitentiary in Lewisburg.  In 1938, when Prince was hoping for parole, 30 gentlemen from the Williamsport and Jersey Shore submitted letters attesting to his good character.  The letters came from businessmen, government officials, a deputy sheriff, and a sheriff.   In total, Prohibitions Prince by Graybill records a total of 19 incidents between 1905 and 1952, where Prince was either fined, charged, or jailed.  Charges over the years ranged from arson, possession of an illegal substance, water pollution, & violation of the Internal Revenue Code (tax evasion). 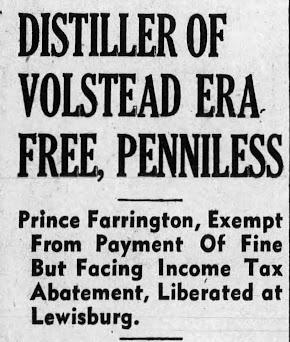 When released in 1939, the former millionaire was "penniless".  He is quoted as saying he wished they'd make alcohol illegal again, so that a man could once again make a decent living.
Federal and state agents raided his property in Bald Eagle Twp, Clinton Co, on August 27 1946.  They confiscated a $10,000 still, five tons of molasses, 2,400 pounds of fermented mash and 125 gallons of whiskey. 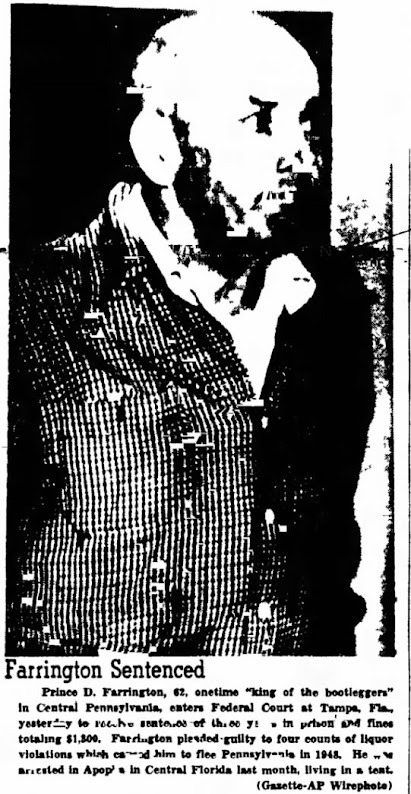 By 1951,  “Farrington was nabbed in a tent near Apopka in Central Florida last month, suffering from arthritis and diabetes, both feet ravaged by gangrene and living from hand to mouth on odd jobs” - The Sun Gazette, April 4 1951
Farrington had suffered from diabetes for years, and even when his clothing was new and sharp, he was known to cut his shoes to accommodate his feet, which had been deformed by the disease.
He was fined $1,300 and sentenced to three years in jail, but he was paroled a year later.  In 1956  Farrington's daughter brought him to Williamsport where he was hospitalized.  He died on June 15th at age 67, from cirrhosis of the liver. 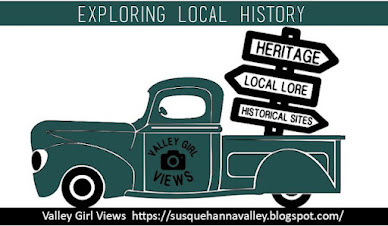 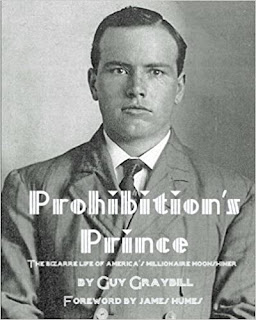 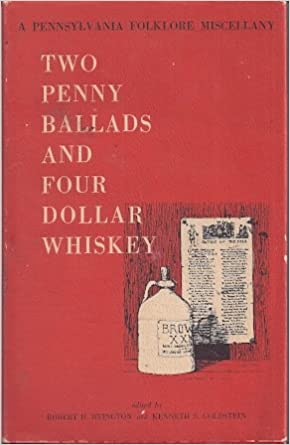 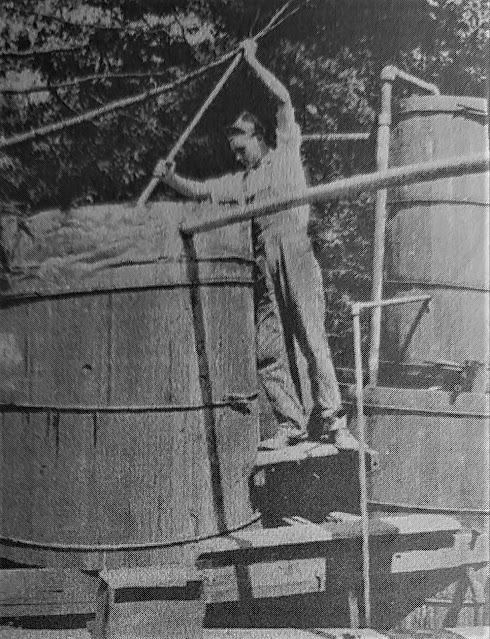 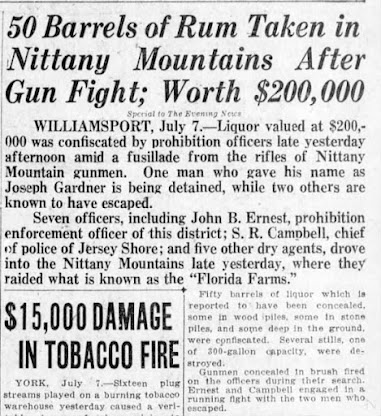 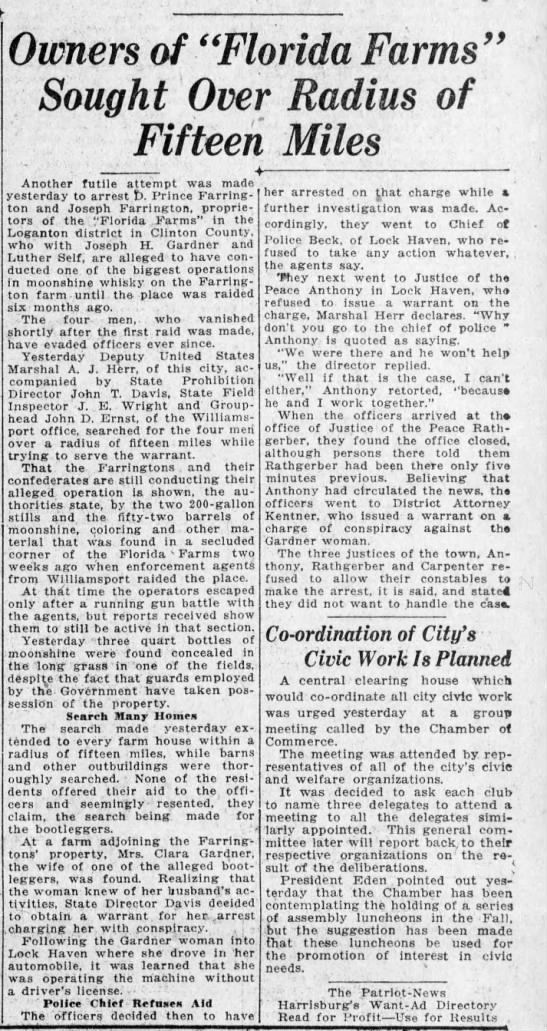 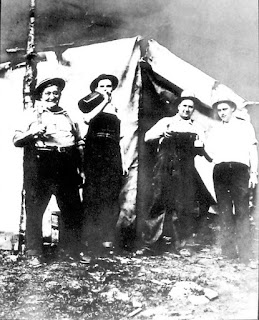 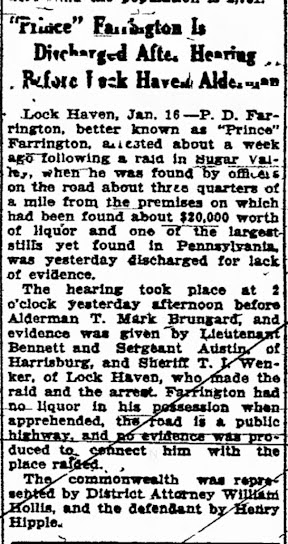 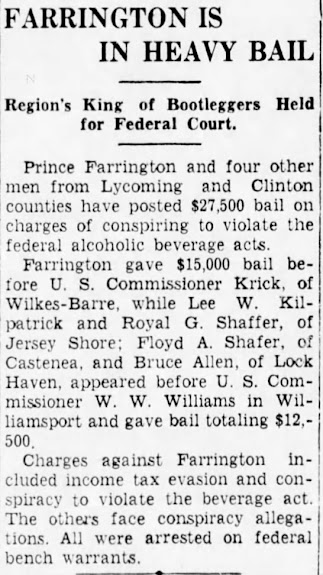 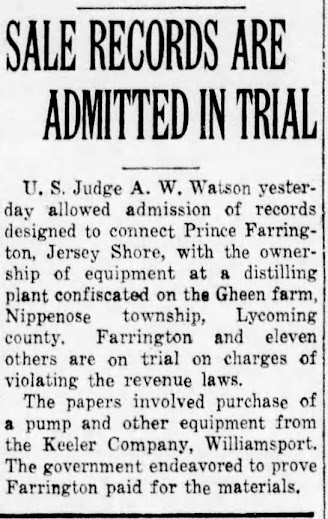 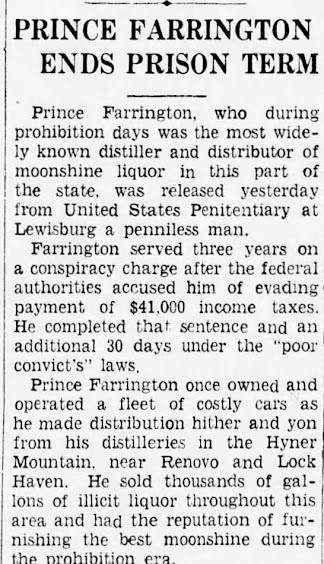 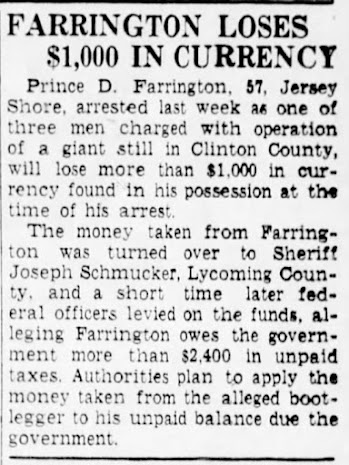 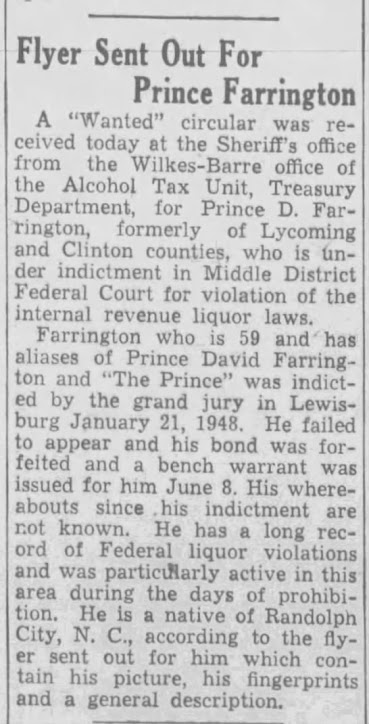 Flyer sent out for Prince Farrington
1948 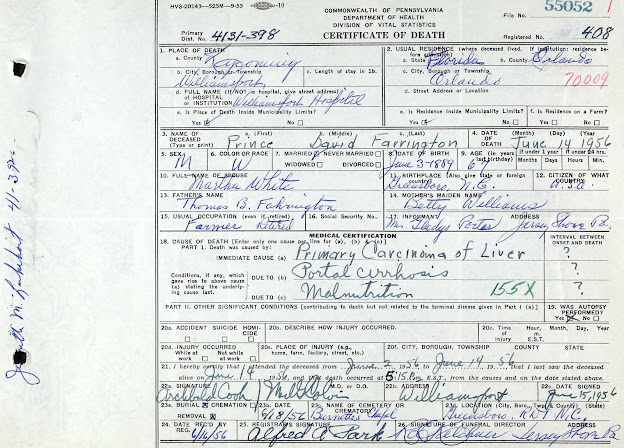 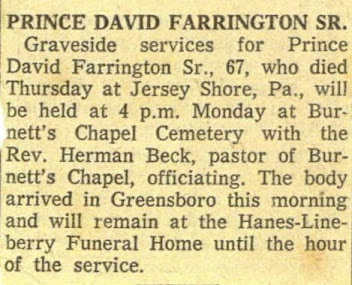 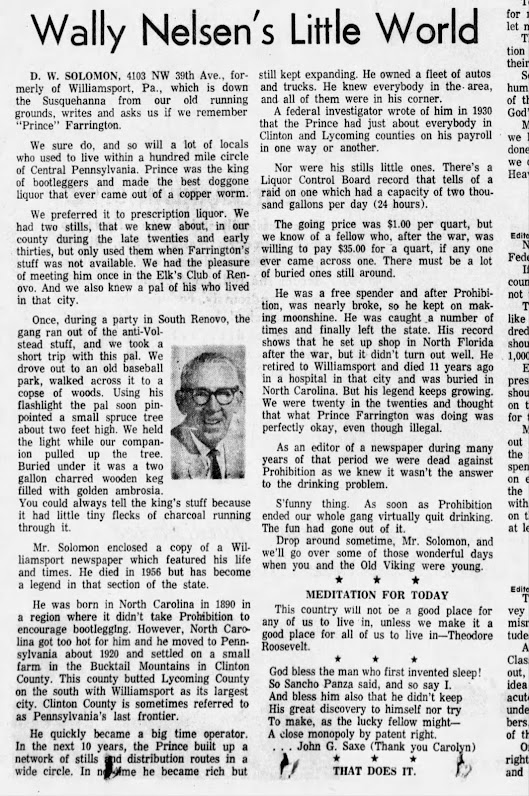 Posted by Heather Truckenmiller on August 27, 2021