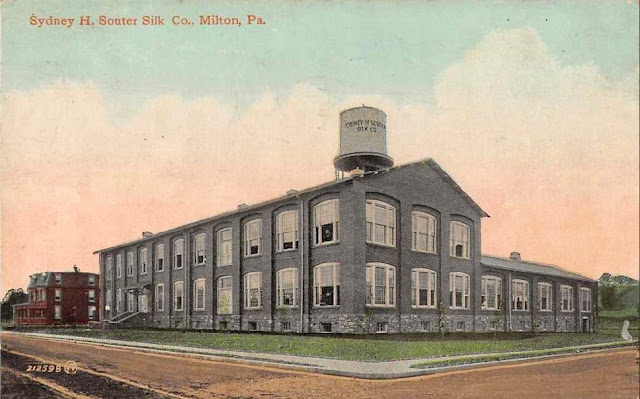 On April 27, 1961, a half a ton of silver dollars was delivered by armored truck to the Milton Bank and Safe Deposit Company.

The Milton Shoe Factory Building was built in 1907 as the Sidney Souter Silk Mill.  That operation was sold at Sheriffs sale four years later, purchased by the Susquehanna Silk Mill.  They operated there until about 1918, when they built a new building at the location where ConAgra sits today.

An annual car show was held there for a few years, and the site was considered for a hospital, but it wasn't really used until 1934 when H.D. Bobb Shirt Company purchased it.  That company operated there until 1938, when it was forced to close due to financial difficulties caused by the depression, and compounded by a theft ring. (Bobb liquidated all of his assets, personal and business, paying every debt.  He then opened a new factory in Montgomery Pa in 1940.)

In 1940, the Chef Boy-Ar-Dee Company purchased the building.  They used it to grow mushrooms, and as a warehouse.  In 1946 The Chef Boy-Ar-Dee company, including this building,  was acquired by American Home Foods.  Hector Biordi then chose to purchase the old silk mill building back from them.

In 1950 Biordi sold the building to Charles Putterman, of Brooklyn NY.  Putterman already owned two successful shoe factories, one in Brooklyn, and one in Rossiter Pa.  The Milton Shoe Company was his 3rd operation.  Putterman sent his son Charles to Milton to manage the operations there.

The Milton Shoe Factory Operated for 41 years, closing in August of 1991.

Sydney Souter was  a manager and recent stock holder in the Monarch Silk Mill in York Pa, when in 1907, he decided to locate his own silk mill in Milton PA.

By April 26 1907, work on the new plant had already begun. Nearly all of the York plants had recently been absorbed in a deal made by the American Silk Company, and Souter intended to sever his connection there as soon as his new  mill was built. Souter, along with his wife and children, moved to 41 North Front Street sometime prior to 1910. 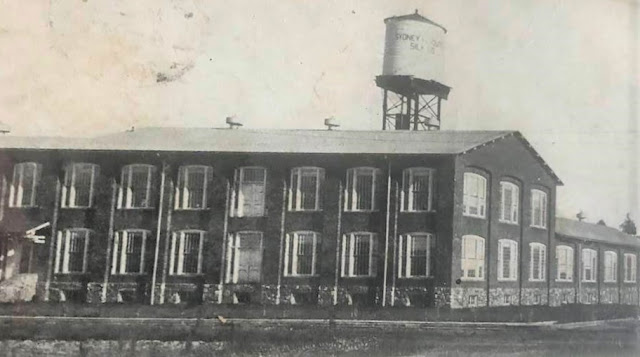 "On October 1st 1907, the first piece of silk was woven. The energy and push displayed by Mr. Souter in the erection and starting of his plant, has been continued, and the mill is now equipped with one hundred and fifty looms, and a large throwing plant, and has a daily capacity of 2,000 yards. The ability and knowledge of Mr. Souter to successfully manage a silk mill comes to him through an ancestry of three generations, who have been successful manufacturers of silks, and with twenty-five years’ experience, from bobbin boy to proprietor, Mr. Souter is thoroughly equipped to develop a large business. They employ about two hundred persons." 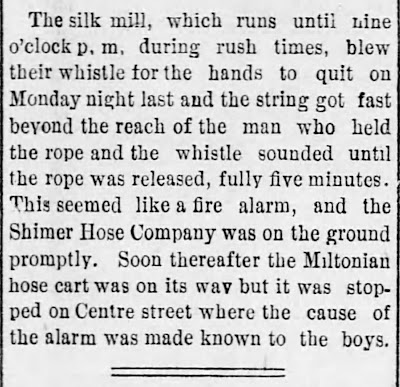 The rope for the whistle, to tell workers it was quitting time, became stuck for a full five minutes.  The Shimer Hose Company was on the ground promptly, with the Milton Hose Cart not far behind,  as it seemed to be a fire alarm.

1910 - Souter Silk Mills Goes Into Receivership
The company went into receivership in early December 1910, not having enough collateral to satisfy it's debts.   In January of 1911, the receivers announced that the company was hopelessly insolvent, and was to be sold.  When it did not sell quickly, it was sold at a Sheriffs Sale in Sunbury Pa, in July of 1911. 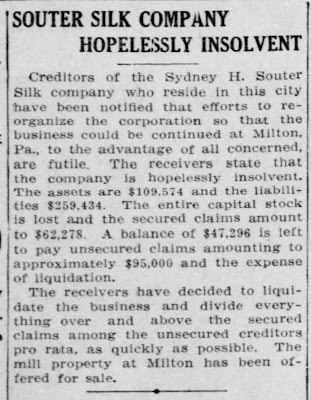 Souter returned to York, and by September of 1911, had a new Souter Silk Mill in operation there. 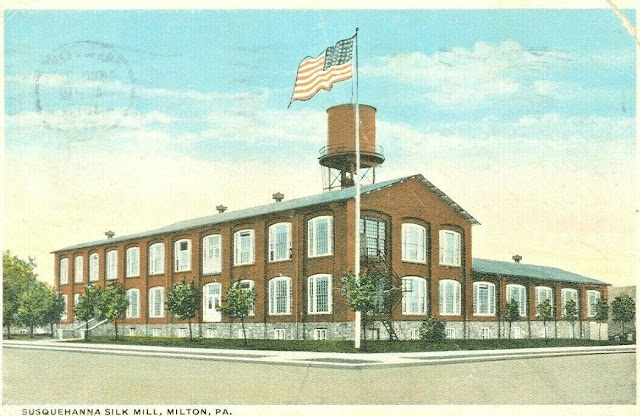 The Silk Mill was sold at A United States Court Sale in Sunbury, at 10am on July 20 1911.
The Susquehnanna Silk Company purchased it for $10,000 "subject to the mortgage"
"The sale was made by the receivers, Mssrs H.W. Chamberlin Esq, John Y Schreyer, and George C. Chapin, and their attorney Hon. W.H. Hackenburg"

Susquehanna Silk Mills, was established in 1896 in Sunbury PA,  and was the precursor to the Sunbury Textile Mills

"Susquehanna Silk Mills had purchased the Souter Silk Company on Hepburn Street in 1913. [correction - it was actually 1911] In the early 1920s they moved their production of silk cloth to the new plant that they built on Marr Street, which was the west and highest part of the marsh. The company deeded their Hepburn Street building and land to the Milton School Board with the provision that it was to be used for educational purposes. The company prospered during the 1920s but encountered financial problems in the early 1930s when the depression made silk clothes and articles too expensive for the average person. Also, rayon was one of the first synthetics made and cloth made from this fiber was more affordable. It was slow, however, to become acceptable to the low-end market for clothing. The Milton plant of the Susquehanna Silk Mills closed in 1936." Milton, Pennsylvania, the 19th Century Town on Limestone Run” by Homer F. Folk 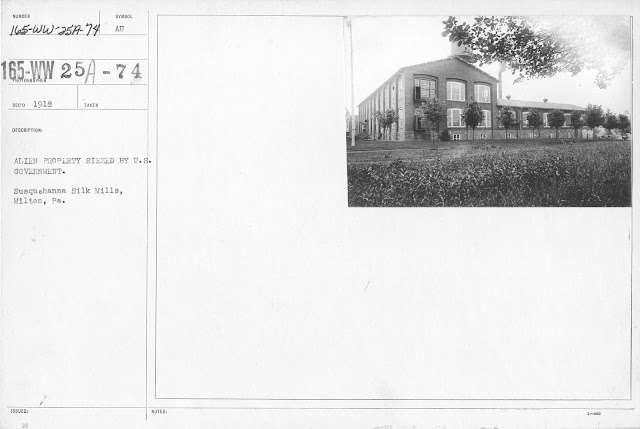 The Office of Alien Property Custodian was an office within the government of the United States during World War I (and again during World War I) that served as a custodian to property that belonged to US enemies. The office was created in 1917 by Executive Order 2729-A under the Trading with the Enemy Act 1917 (TWEA) in order to "assume control and dispose of enemy-owned property in the United States and its possessions."

It appears to have been returned to the Susquehanna Silk Mill after the war. 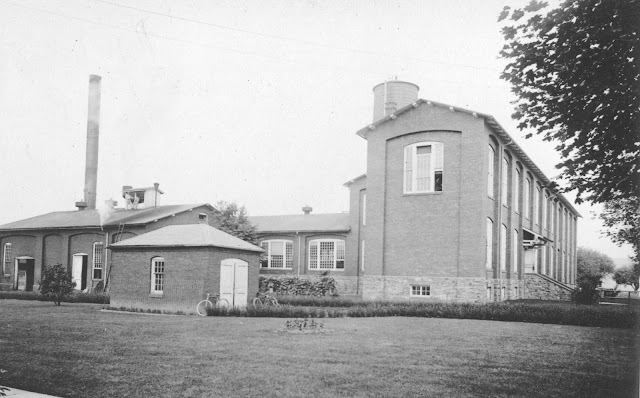 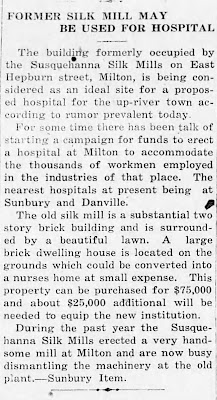 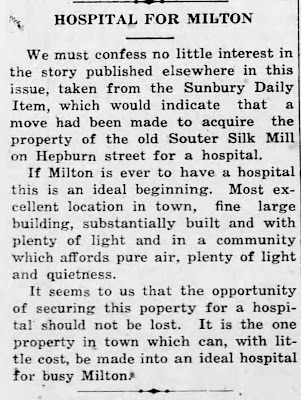 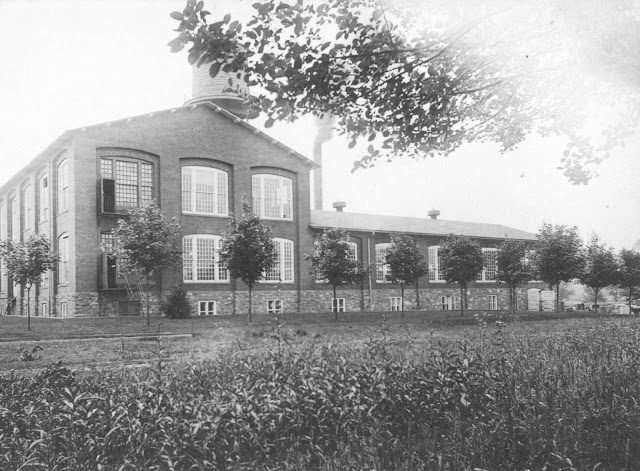 The building was given to the Milton School District in 1926 with the stipulation that it never be used again as an industrial plant.  State education authorities would not allow the building to be used for school purposes however, so the school district had to petition the bankrupt Susquehanna Silk Mills to eliminate the industrial restrictions.
Once that was done, the plant was sold to the H.D.Bob shirt company in 1934. 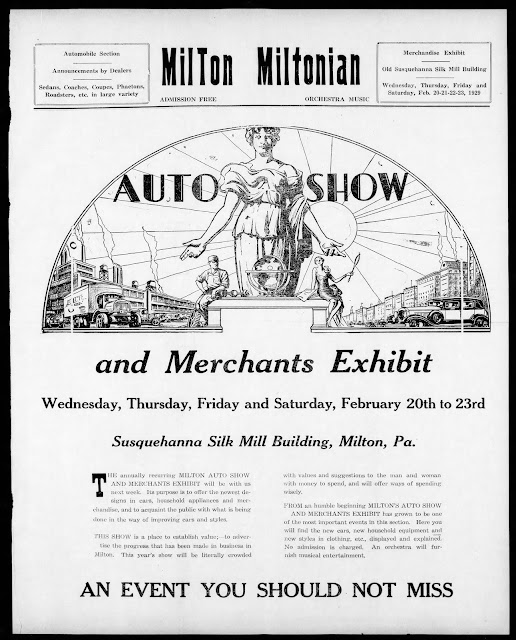 1934 -  Purchased By The H.D. Bob Shirt Company
H.D. Bob Shirt Company purchased the former Souter Silk Mill building.
"The building, which was taken over by the Susquehanna Silk Mills and operated by them for many years prior to the erection of the new plant was donated to the Milton School Board by the Susquehanna Company more than 10 years ago.  It has since been unoccupied."
The Danville Morning News, January 3 1934 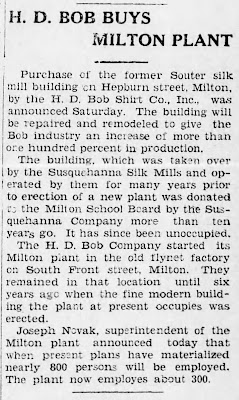 In February of 1934 the Daily Item reported that renovations were underway, and the H.D. Bob company hoped to occupy the building in early April
The entire building was being rewired, floors sanded, and an extensive new plumbing system was being installed. More than 600 broken window panes were being replaced.

The first floor was to be used as the cutting department, and the second as a pressing room.  The basement would hold stock and storage. These departments would be moving from the factory that was located at the corner of Maple Avenue & Race street.

H.D. Bobb company ceased operations in 1938, for a financial reorganization.
The company faced a declining market during the depression, and found themselves with financial difficulties.  Mr Bob however, made good and paid every dollar owed to his creditors, turning over all of his personal resources to do so.

He then opened a new facility in Montgomery PA.

Chef Boy-Ar-Dee Quality foods the one they built in 1919) in 1938.  In 1940, they bought the original Susquehanna Silk Mill Building (Formerly Souters Silk Mill) too. 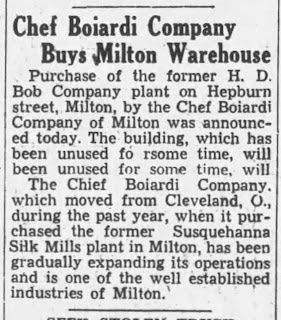 Chef Boy-Ar-Dee Quality foods purchased the building and used it for growing mushrooms, and for a warehouse.When that firm was sold to American Home Foods in 1946, the building was included as part of the deal, but Hector Biordi later repurchased it from that company.

In September of 1950, the Building, referred to as the Biordi Building, was sold to Charles Putterman, Brooklyn Shoe Manufacturer.

Charles Putterman opened his third shoe factory in the town of Milton, in November 1950.  His son Saul was put in charge of the operations there.The plant opened with five female employees being trained, with plans for the plant to eventually employ 100 people, and to produce 2,500 pairs of shoes daily.The Brooklyn plant produced 6,000 pairs a day, and the plant in Rossiter Pa produced 5,000 pairs a day.

1952, August - Workers Strike To Protest Foreman Being Moved
200 workers walked out to protest fitting room foreman Charles Femia being moved to the Brooklyn plant.   Although Femia had been charged with not complying with orders, he was being moved at the same rate of pay, in the same capacity, with the company paying his moving expenses.

The workers on strike were all members of the Local 146 Boot & Saddle Workers Union, but the union was not called in, since the walk out was not union sanctioned.  The strike had been at the behest of Femia, as a sympathy measure.  He was not a member of the union himself.

After learning that he had encouraged the workers to strike, halting production for a day and a half,  the plant did not move Femia - but decided to fire him instead.  The workers were assured that none of them would be held responsible, and all could return without loss of pay or increase in work. 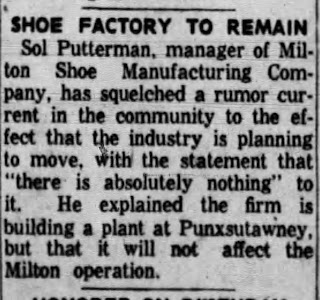 1961  -  Receives  $30,000 Expansion Grant
In April of 1961, The Pennsylvania Industrial Development Authority approved a loan of $30,000 to the Milton Area Chamber Of Commerce, to use in the expansion of the Milton Shoe Factory building. The expansion was expected to provide 50-75 new jobs.

On April 27th, the Daily Item reported that drawings and plans had been completed to add 13,200 sq foot addition to the Milton Shoe Manufacturing Company's plant.
Saul Putterman was the general manager at the time.

The expansion would house the new leather storage and cutting facilities on the lower floor.  Clear windows would be installed in that section.  The main floor was to have translucent green windows to filter sun rays, but allow for natural lighting.

According to this article, the Milton Shoe Manufacturing Company was in it's 11th year of operations in the community. (That would mean it began in 1950)

At the suggestion of the Milton Chamber of Commerce, the company agreed to "dramatize it's payroll of the week" by paying the employees one half of their wages in silver dollars.
A half a ton of silver dollars was delivered by armored truck to the Milton Bank and Safe Deposit Company on April 27, 1961.  The company payroll clerks then packaged the employees silver dollars in individual leather pouches "made at the Milton plants".
The pouches were marked Milton Shoe Company in gold letters.

In 1961, The Milton Shoe Factory was Milton's second largest employer, and a "most stable member of the industrial area."  Their annual payroll was approximately one and a quarter million dollars. 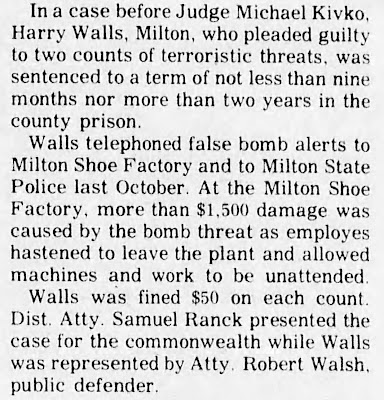 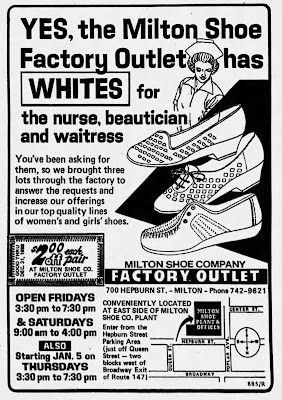 Outlet established in 1988 "to market excess inventory and to give factory employees a chance to buy what they produce at a discount." Rooted in the tradition of the company store, the outlet became a benefit of working the factory, with employees receiving mark downs on the already discounted prices.

1991 - Milton Shoe Factory Sold At Auction
The store held a two week sale, and then the factory was sold at auction on August 22 1991.

For More Local History & Stories in the surrounding areas:
https://susquehannavalley.blogspot.com/2020/04/milton-pa.html 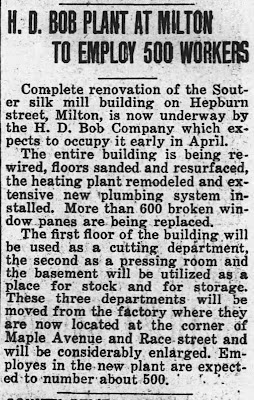 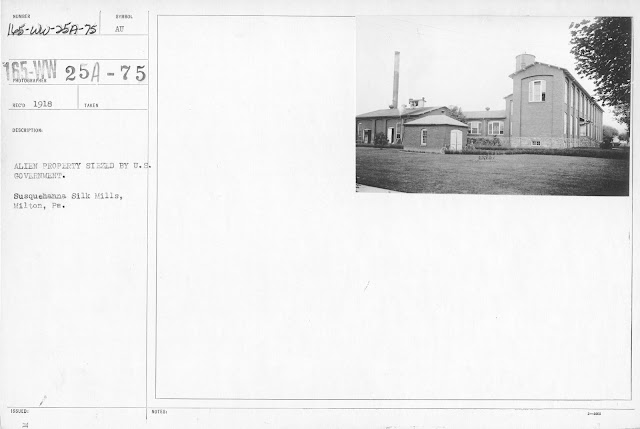 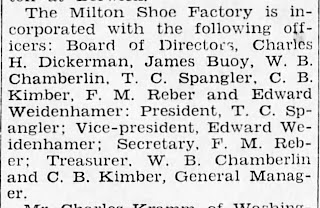 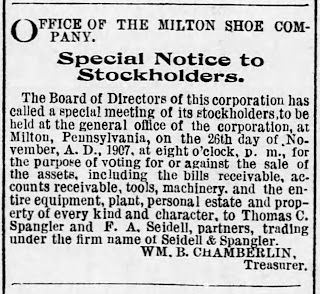 Posted by Heather Truckenmiller on July 20, 2020