At about 8pm on the Sunday evening of December 12, 1875, smoke was observed in the hall leading to the upper rooms of the Riverside Hotel. Those who were staying upstairs got out quickly.  One woman, a Mrs Huth, narrowly escaped suffocation, and "for several hours required the attention of three physicians".

No fire could be seen, but the sound of cracking, "as if dry hemlock was burning", could be heard.  Crowds of people on their way home from church stopped along the street, and "the most fearful excitement prevailed, as dark heavy columns of smoke rose over doomed buildings."

"Adding to the terror of the scene, the wind blew almost a hurricane.  Men and women were rushing in all direction while those interested in the adjoining buildings at once commenced the removal of their goods.

"It soon became apparent that, with the inefficient prepartions of the town for fighting fire, the loss of property would be great.  Watsontown and Lewisburg were at once appraised of the fire.  Calls were made on other places, but the lines were not open." - The Lewisburg Journal

Smoke was billowing from the two buildings on either side of the hotel, but still, not a spark nor flame was seen when the  Watsontown fire company arrived in Milton at 10pm

At 10:45pm, flames burst through the roof of the hotel, and within minutes, the large 3 story buildings on each side were both engulfed in flames.

The Lewisburg Fire Company soon arrived with their steamer, but the water "had little effect".

"There seemed to be no change of cutting off the fire above, short of Broadway, as the buildings were all connected, but the firemen worked manfully and succeeded about two o'clock in the morning in getting it under control at the store of George L. Piper."

"A reporter of the Gazette and Bulletin visited Milton last evening to view the ruins of the recent great fire.  On entering the business portion of the town it was evident, from the groups of persons assembled on the street corner and places of business, that something unusual had occurred.  The fire seemed to be the only topic of conversation.  The office of Huff's hotel was filled with people who had not yet gotten over the excitement of the previous night.  In the store store of William Phillips, adjoining the burned district, were several of the parties who had lost heavily in the fire." - The Sunbury Gazette 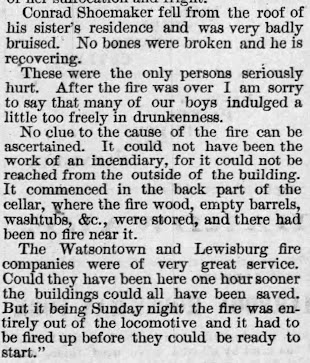 The only other person, besides Mrs Huth, seriously injured was Conrad Shoemaker, who fell from the roof of his sisters building.
The Gazette further reported that "many of our boys indulged a little too freely in drunkenness " after the fire, but did not say specifically if that was the cause of Shoemakers fall.  The paper also reported that the buildings could all have been saved had Lewisburg and Watsontown been able to arrive sooner.  "But it being a Sunday night, the fire was entirely out of the locomotive and it had to be fired up before they could be ready to start."

In December of 1875, the Sunbury Gazette reported that since the "late destructive fire" in Milton, the Mitonian ( one of the towns fire companies) wanted two steam engines, and that they wanted the portion of the town lying in Turbut twp to be annexed to the borough so that that area could assist in purchasing the engines.
See a timeline of the Milton Fire Companies here:
https://susquehannavalley.blogspot.com/2020/08/an-incomplete-history-of-fire-companies.html
============
The Damages
============ 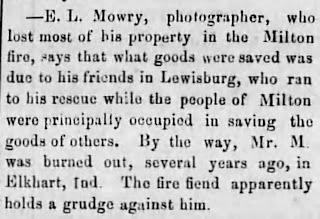 Pipers business was damaged by fire and water, with damages estimated to be in the amount of $1,500 (roughly $35,000 today).  Other buildings damaged or lost in the fire included: 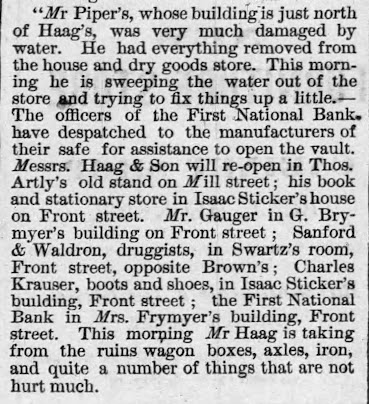 Five years later, in May of 1880, The Great Fire would once again wipe out these buildings, and hundred more.  See photos of the 1880 fire here - https://susquehannavalley.blogspot.com/2020/05/the-great-fire-of-1880-when-entire-town.html

On December 12 1875, 13 businesses, including the Goodlander Block, in Milton were destroyed by fire.  In the diagram above, the buildings inside the thicker black lines were all affected.  They included: