When Christmas Ornaments Were Made In Wellsboro - Shiny Brites

I have a collection of these ornaments, inherited from my Grandmother, but I had never realized they are a particular brand - or that they  were made locally, in Wellsboro PA.  In fact, the vast majority of all Christmas ornaments in the 1940s and 1950s were made in Wellsboro.  The company modified their ribbon machine, designed to make lightbulbs, to mass produce the ornaments, and by 1949 Wellsboro was the Worlds Capital For The Christmas Ornament Industry, producing 90% of the worlds Christmas ornaments.  In addition to their own line of corning ornaments, and the Shiny Brites, the glass factory located in Wellsboro pa created the ornament blanks for Santa Heim, Coby, George Franke, Marks Brothers, Doubl-Glo, and Santa Novelties. 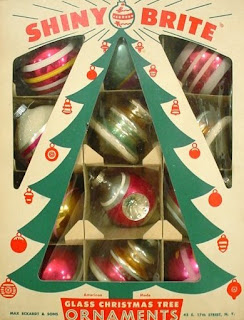 The Corning Glass website tells us that Christmas ornaments, for centuries were made the small German village of Lauscha, and the entire community was involved in the process.
"Skilled glassblowers made delicate ornaments by heating glass tubes over a flame and then introducing a small ‘puff’ of air in order to expand the tube into a small bubble. The glass ornament was then left as it was or was manipulated into various shapes, such as stars or reindeer.
With the blowing and shaping of the ornament complete, it was sent to be decorated, a task often undertaken by women or children. This was accomplished either with a brush, by pouring liquids into the ornament’s interior, or simply by dipping the glass into a liquid color. After careful packing, the ornaments made in Lauscha were shipped and sold all over the world, including to the United States."
For years, Lauscha was the only supplier of glass ornaments. 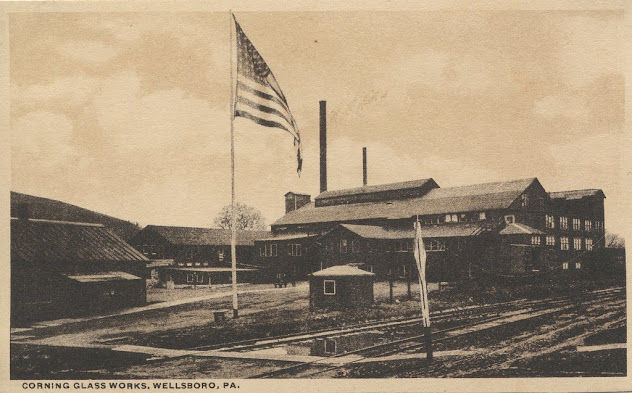 Corning glass works opened in Wellsboro Pa in 1916, when they purchased a defunct plate glass plant to blow light bulbs for Thomas Edison. The company operated for 100 years, closing its doors in 2016.
And then Max Eckhart, who owned a toy factory in a nearby village, began manufacturing ornaments.  Eckhart came to New York in the 1920s, and with war looming in Germany, he realized he would would not be able to reliably ship ornaments from there to the US. 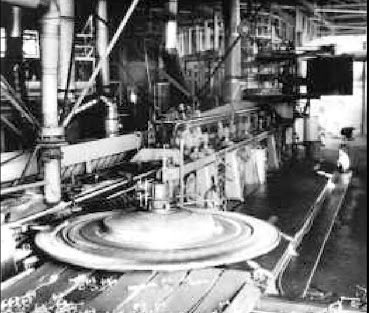 The Ribbon Machine at the corning glass plant in Wellsboro
The Ribbon machine had been invented at the Wellsboro glass factory, for producing Edisons' light bulbs.  Eckhart approached the company, and soon they were able to modify their machine to produce the Shiny Brite ornaments. 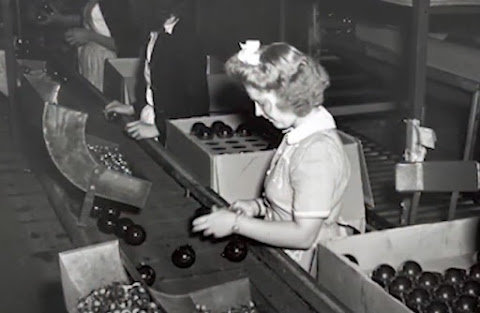 Ornaments being produced at the Wellsboro factory
“Unable to find labor as cheap as that in Europe, Echart turned to  machine and mass production.  It uses virtually the same machine with which it makes electric light bulbs.  Glass pours molten from huge furnaces, spins out in strips over endless belts, is nudged into shape by compressed air, fashioned by molds which pop around the red-hot glass balls.  The formed balls are knocked off the strips by revolving hammers.  Then they are annealed, colored, rolled along finished for packing.  At peak, Corning makes 300,000 ornaments a day.  Besides balls, it makes what the trade calls Small Fancies and Large Fancies in many shapes – bells, oblongs, pyramids, lanterns, diamonds, reflectors, pine cones and acorns.” 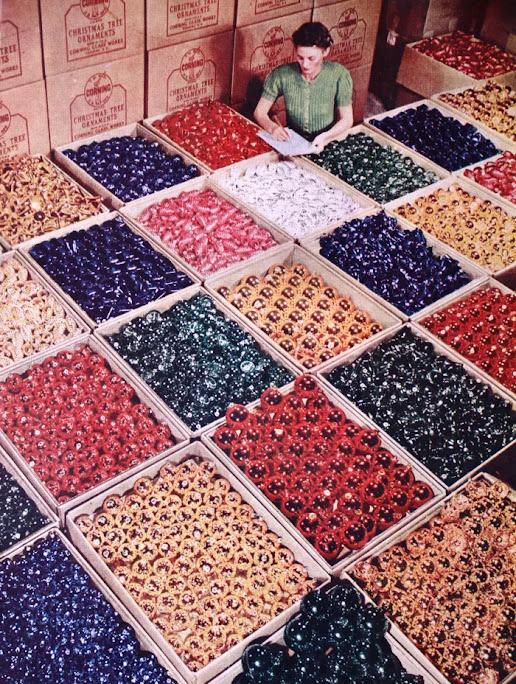 "By 1940, Corning was producing about 300,000 unadorned ornaments per day, sending the clear glass balls to outside artists, including those at Max Eckardt’s factory in New Jersey, for decoration. The ornaments were lined with silver nitrate, then run through a lacquer bath, decorated by Eckardt’s employees, and finally, packaged in brown cardboard boxes." 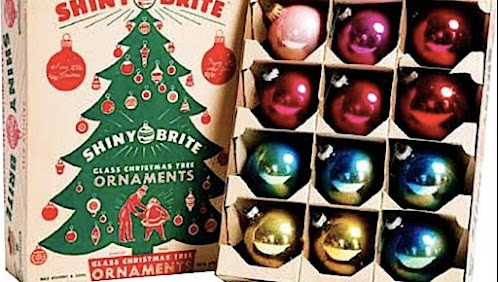 "During World War II, however, the lacquer paint and silver lining became scarce, forcing Eckardt to make clear ornaments with thin, pastel stripes, which didn’t require as much pigment. The metal caps and hooks were replaced with cardboard and yarn. Some ornaments came with a tiny sprig of tinsel inside, but eventually, even this small amount of metal was prohibited due to wartime shortages."

By 1949, the Williamsport Gazette reported that Wellsboro was the Worlds Capital for Christmas Ornament Industry.

By 1940, corning was making their own line of ornaments, in addition to the Shiny Brites.  They also made blanks for Santa Heim, Coby, George Franke, Marks Brothers, Doubl-Glo, and Santa Novelties
A 1941 article in Popular Mechanics said:
"In addition to their own brand of Christmas ornaments, by 1940, Corning was producing all the ornament blanks for several different Christmas ornament decorating and distributing companies. Max Eckardt decorated and marketed Corning blanks under his Shiny Brite brand....  Other companies utilizing Corning ornament blanks during the 1940s were Santa Heim, Coby, George Franke, Marks Brothers, Doubl-Glo, and Santa Novelties - these companies simply decorated the Corning-manufactured blanks and sold them as their own brands, they did not manufacture any of the glass themselves. Max Eckardt’s Shiny Brite brand utilized more Corning blanks for a greater length of time than all other decorators and distributors. Corning sold its Wellsboro, PA plant in 1981 to Osram Sylvania, and the ‘Ribbon Machines’ continue today turning out light bulbs and ornament blanks." 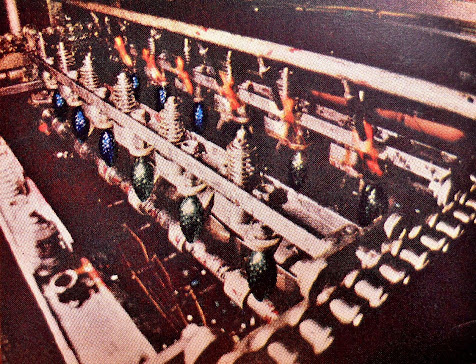 Corning Glass in Wellsboro developed molds to emulate all the ornaments that had been purchased from Germany here in America.  The molds were sprayed with linseed oil to keep the glass from sticking to the cast iron molds. Other shapes included Santa Clauses, Sleighs, Candy Canes, Christmas Trees that would eventually be silvered and painted. 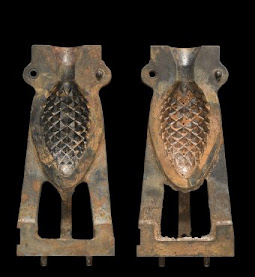 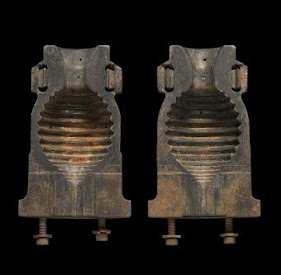 Molds for the pinecone, and ribbed teardrop, ornaments
The original ornaments were all silver, and all round.  Colors were soon added, and then shapes as well.    Over time, they came to  produced in red, green, gold, pink, and blue colors, and , new shapes included tops, bells, icicles, teardrops, trees, lanterns, and pinecones. 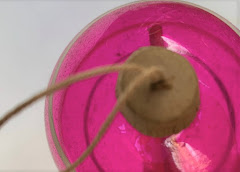 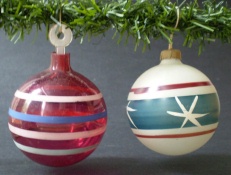 During World War II,  Shiny Brites metal ornament caps and hooks were replaced with cardboard tabs and string.  The rarest, and therefor most collectable, shiny brite ornaments are transparent, with cardboard tops. 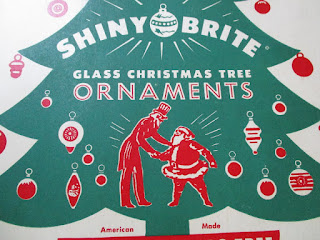 Ornament boxes were decorated with a picture of Santa Claus shaking hands with Uncle Sam. Silver nitrate and lacquer were eliminated,  because of their scarcity.   Paint was applied  directly onto the clear glass balls. 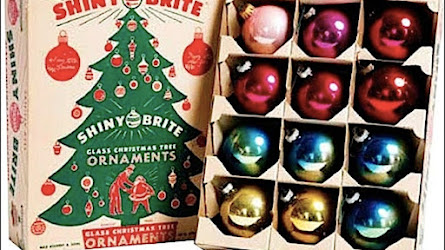 After the war ornaments were again topped with the original metal Shiny Brite cap and hook. 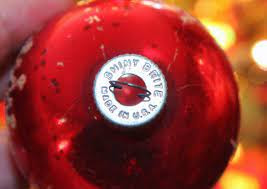 L.L. Sterns Ad from 1957 [Williamsport]
In 1955, Thor, a washing machine manufacturer, bought Shiny Brite – eventually producing about 75 percent of the ornaments sold throughout the world. 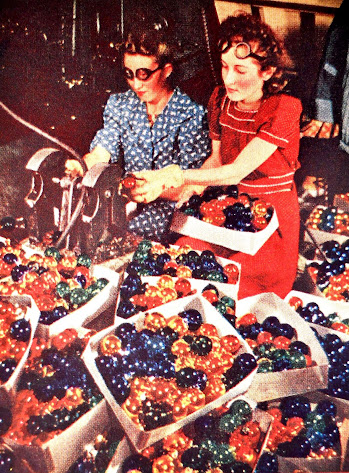 Workers "grinding the pike" on ornaments
During the years of peak production, the company had factories in  Hoboken NJ, North Bergen, and West New York, as well as in Wellsboro Pa. 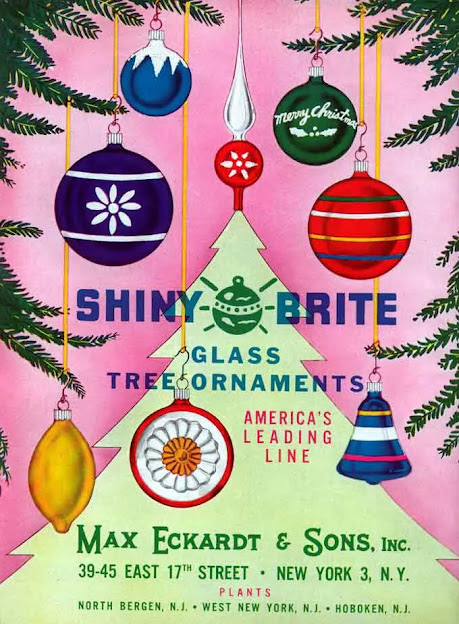 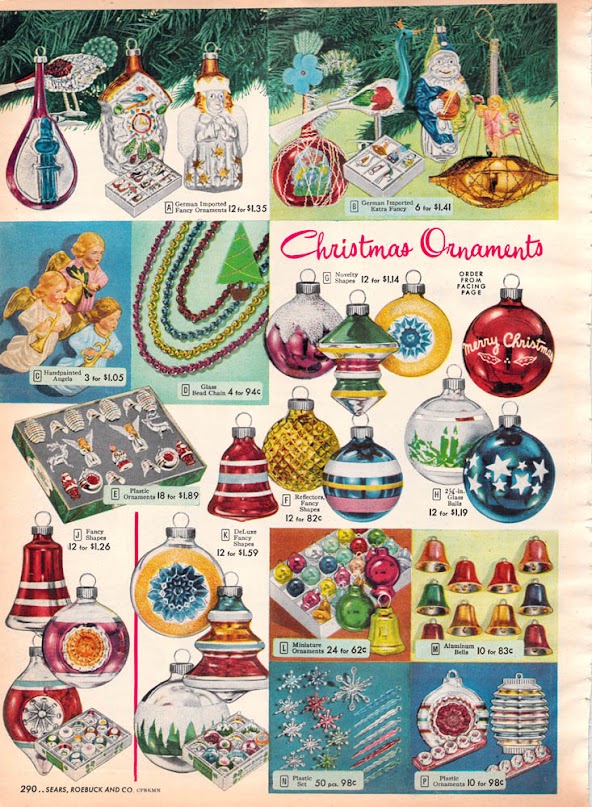 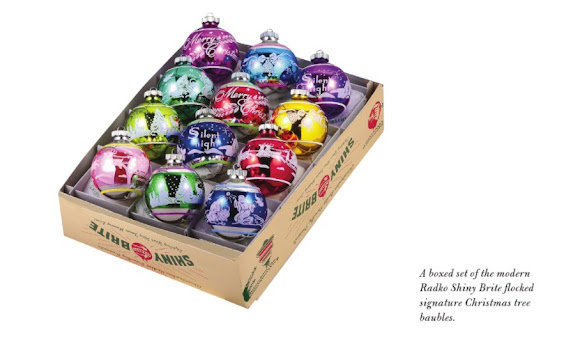 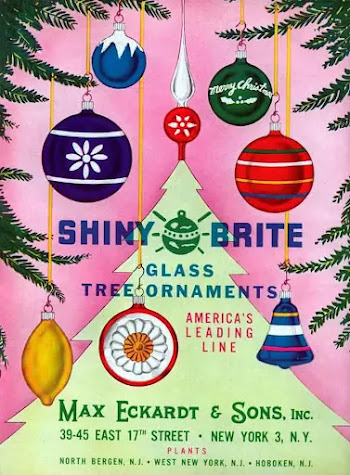 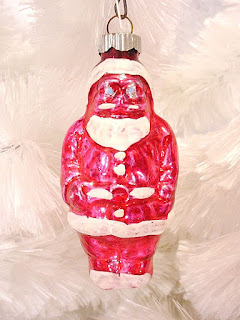 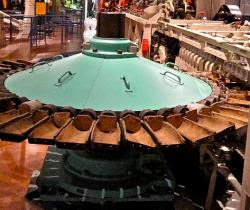 The Corning Ribbon Machine is now part of the Henry Ford collection
https://www.thehenryford.org/collections-and-research/digital-collections/artifact/141576/ 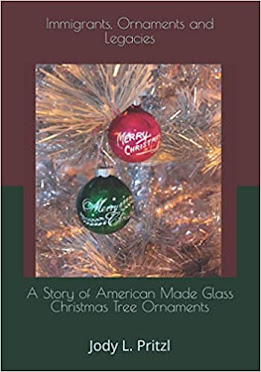 https://amzn.to/3qaHBTo
Immigrants, Ornaments and Legacies” tells the stories of the companies who created 20th century Christmas tree decorations. The Shiny Brite™ story of Max Eckardt and Sons is chronicled along with rival firms that competed to win the key customers of Woolworth’s and Sears. Bernhard Wilmsen was one of the first Christmas vendors to Woolworth’s and continued to be for decades. George Franke emigrated from Germany to America at the time of the U.S. Civil War and employed hundreds of people in Baltimore, Maryland. National Tinsel Manufacturing in Manitowoc, Wisconsin would be a recognized Christmas industry leader until a 1991 merger worth $90 million. Before millions of Christmas bulbs were manufactured and sold in America, thousands were imported by Woolworth’s and Sears. Beginning as a family business in Lauscha, Germany many husbands, wives and children hand crafted glass ornaments. As early German immigrants came to the United States they evolved the industry with inventions and patents. Survival and prosperity were never guaranteed as the companies struggled during precarious times of tariffs, trade wars and world wars. If not for Corning Glass Works inventing the means to make 80 million glass bulbs a year, the modern era of Christmas tree decorations would have stopped with German blockades and boycotts. With rich details using photographs and statistics, the industry of American glass bulb Christmas ornaments is documented from the 1800’s to the 1960’s. In their own words, family descendants of ornament makers tell their favorite memories of being surrounded by Christmas all year long and their special holiday traditions that live on today. “Immigrants, Ornaments and Legacies” is a family centered story of decades of Christmas tree decorations that are highly collectible today. An ornament identification section is included to help collectors date their precious Shiny Brite™ and George Franke ornaments passed down lovingly from generation to generation.
================ 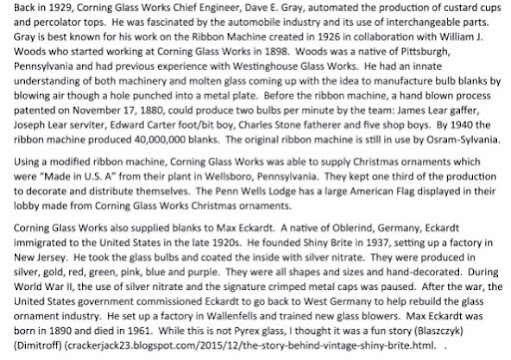 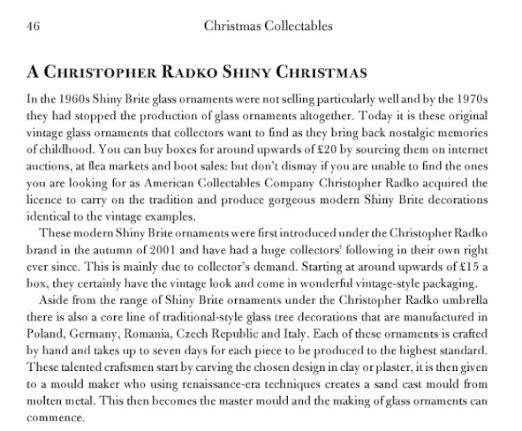 The Radco Ornaments
In Wellsboro’s Penn Wells Hotel and Lodge lobby there is an American flag created from the Shiny Brite Christmas bulbs that was gifted to the Penn Wells by the Corning Corporation.

Posted by Heather Truckenmiller on December 20, 2021

Email ThisBlogThis!Share to TwitterShare to FacebookShare to Pinterest
Labels: Christmas